Whilst I was undertaking my research into John’s life I was contacted by his great grandson also called John Atkinson. He kindly gave me a copy of his research into his great grandfather’s life.  I have added copies of documents and photographs but the main body of the research comes from the Atkinson personal family history.

“John Guttridge Atkinson was born on St George’s Day 1884, in The Brushes, Whittington, the son of John William Guttridge Atkinson, a coal miner, and his wife Maria, and baptised in the village’s St Bartholomew’s Church.

Raised in nearby Barrow Hill, John received a Victorian education at the local village school – he appears in the 1891 census as a 6 year old school boy living with his parents and siblings at 91 Block House, Barrow Hill near Staveley.

At some point during the final years of the 1890’s the Atkinson’s moved from Barrow Hill to nearby Shirebrook over the county border in Nottinghamshire. The move was likely to have been prompted by the sinking of a mine in Shirebrook in the mid-1890’s, which created hundreds of jobs. In 1901, 17-year-old John was living with his parents at 4 Ashbourne Street in Shirebrook – his occupation on the census of that year was listed as “Coal Pony Driver, Below Ground”.

He was working with his father, who was grafting at the coalface as a Coal Hewer, and his elder brother, Stephen, working as a coal filler.

Four years later in 1905 he married Martha (Hunt) and they were to go on to have three boys, Percy, Jack and Donald over the coming seven years. In 1911, John moved the family to Mexborough for work, where they were living when war was declared.

With the onset of the Great War in September 1914, John enlisted as a volunteer at Wath-on-Dearne  with the 1/5 Battalion of the York & Lancaster Regiment.

In April 1915, the 5th Battalion York and Lancaster Regiment went to war to reinforce and plug the gaps in the Regular Army which, it is generally accepted, had virtually ceased to exist. The vast majority of the part-timers of the 5th Battalion leapt at the chance to serve their country overseas in the ‘great adventure’ and were soon on their way to the trenches of Flanders and the harsher realities of war on the Western Front.

On the morning of 13th April 1915, the 1/5 Battalion congregated outside York baths ahead of their departure for France. After parading in England for the last time and saying their final farewells to family and friends who had made the journey to York to see them off, the 28 officers and 930 other ranks, including John, left York station for foreign service on board two trains bound for Folkestone. Amongst the crowd that day would have been Martha, Percy, Jack, and Donald waving goodbye to their proud husband and father who was answering the call of duty to defend his country, not realising that it would be the last time they would ever see him.

The battalion left York that day arriving at Folkestone in the evening and made the crossing to Boulogne the same night. Arriving late they marched into Ostrehove Rest Camp under the shadow of the ‘wireless station’ on Mont Lambert and stayed there until 4pm on the afternoon of 14th April, when they boarded trains for Hazebrouck. Disembarking the train at 1 o’clock in the morning on the 15th April the battalion marched to Merville, 12km north of Bethune and some 15km west of the front line trenches as the shell flies. There it rested until 9.30am when it marched the seven kilometres northeast to the village of Doulieu, along with the 1/4 York and Lancaster Regiment and the 1/5 King of York Light Infantry, which together made up the 1/3 West Riding Infantry Brigade. There the billeting officers tried to find shelter in farms and cottages in and around the village.

Between the 18th and 25th April all the officers, NCOs and men went up to No. 5 section of the front line trenches east of the village of Fleurbaix in small parties for a period of 24 hours instruction in trench warfare attached to units of 25 Infantry Brigade of the 8th Division. During this time and only ten days after arriving in France, John spent his 31st birthday, separated from his wife and three young sons on the front line, the conditions of which were described in the Barnsley Chronicle, by Company Sergeant Major Lumb:

“All of us have now been under fire from the Germans in the first line of British trenches, having occupied them alongside two famous regiments, namely The [1st Battalion] Rifle Brigade and The [2nd Battalion] Royal Irish Rifles. We found these two regiments…very cheerful and happy and proved very good comrades. Their experiences were very valuable to us and put much heart and confidence in our fellows. It is very exciting sport shooting at the Germans, but not very interesting when their snipers, who are deadly shots, send bullets whistling past our heads in rapid succession… Had you seen the weary troops struggling back to their billets after their turn in the trenches in the early hours of the morning you would have marvelled at their stamina and courage. The only complaint made was, “I’d give owt for a Woodbine.”

On 29th April, the German artillery shelled Fleurbaix for three hours from 9am until noon and again after lunch from 1.30pm for an hour. This hindered battalion preparations for the move to the front line, but it set out at 8pm to relieve the 1/4 York and Lancaster Regiment (Hallamshires). The relief was completed by 11pm without casualties in spite of the fact that the machine gun detachment came under heavy fire as it moved forward. The war diary for 30th April – the first full day in the trenches – records the fact that ‘nothing of importance occurred but snipers very active’.

The first stint in the trenches ended at 10.30pm on the 2nd May when the 1/5 was relieved by the 1/4 York and Lancs and the battalion trudged back to billets in Fleurbaix. There the men rested in brigade reserve until the evening of the 5th May when they in turn relieved the 1/4 in the same sector of the line. The war diary for the 6th May – the first day of the second full tour of duty – simply records that the battalion was in the trenches and that there were ‘no important occurences.’

The 1/5 Battalion garrisoned the same stretch of front line trench, roughly half that allotted to the 1/3 West Riding Infantry Brigade, either relieving or being relieved in turn by its sister unit the 1/4 (Hallamshire) Battalion, York and Lancaster Regiment, until 26th June 1915. Relieved by the Hallamshires at 10pm on the 8th May the 1/5 reported the situation as normal with the Germans ‘apparently very inactive’, firing just nine shells during the day. It then moved back with B Company in immediate support to the 1/4, HQ, C and D Companies at Elbow Farm and A Company in reserve in the trenches in front of Fleurbaix.

At 9.45am on the 26th June 1915 the battalion turned its back on the trenches of the Fleurbaix and Bois Grenier sectors for the last time and marched the nine kilometres to Sailly-sur-la-Lys, where it bivouacked for the night. The battalion headed north in stages and by the 1st July were billeted or bivouacked on the road between Watou and Poperinghe on the Franco-Belgian border, which they crossed over during the following days. On the 8th July the battalion marched to a rest area in Oesthoek Wood near Poperinghe and set up bivouacs.

Around this time, John received an emotive postcard from his eldest son, Percy, written in the schoolboy scrawl of a typical 8 year old missing his dear dad, which read:

“Dear Dad, just a few lines hoping too find you well. I like my school very much. Thanck you for my card and ever since you wrote that card Jack wanted a card, and I hope you will get through all right and come home savely from your loved, Percy.”

By mid-July the battalion was once again involved in heavy fighting on the front line at Boesinghe, part of the Ypres Salient, and remained there through the end of July and August. John was killed in action on the 29th August 1915 and buried with his fallen comrades from the 1/5 Battalion of the York & Lancaster Regiment at nearby Talana Farm cemetery, just a kilometre from the edge of the Salient. 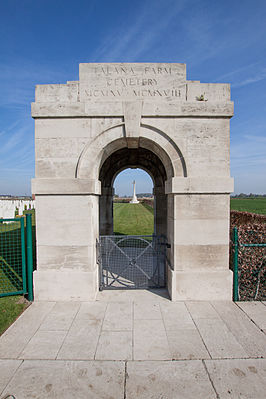 His medal card shows the three medals he was awarded for his active service in the war – The 1914-15 Star, which was instituted in 1918 and was awarded to those who saw service between 5 August 1914 and 31 December 1915. The medal was issued named, with the recipient’s details impressed on the star’s reverse. All recipients of this medal also received the British War Medal and Victory Medal. The British War Medal 1914-20 commemorates some of the bloodiest battles that have ever been fought by British & Commonwealth troops. The medal was instituted by King George V in 1919 to mark the end of the First World War and record the service given. Finally, the Victory Medal 1914-19 was instituted in 1919 to commemorate the victory of the Allies over the Central Powers.” 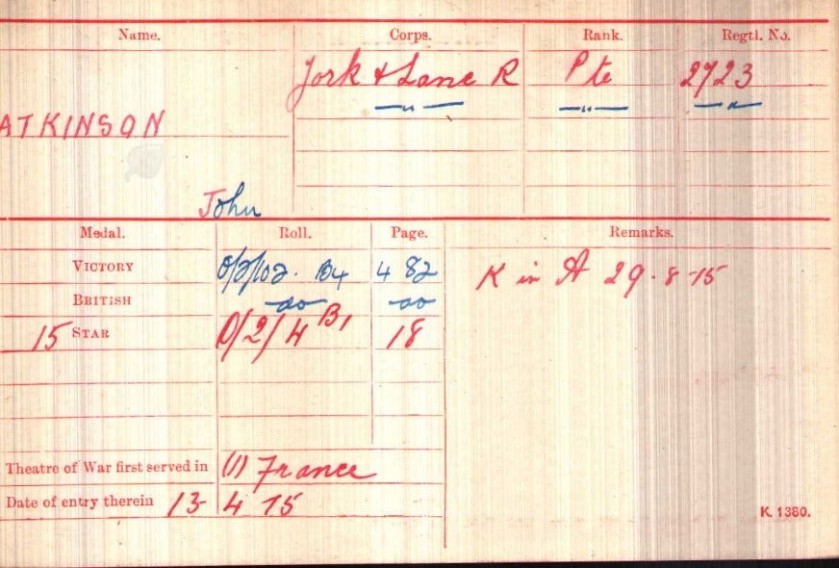 John Atkinson is remembered on Old Whittington  and the Brushes War memorials.