When I posted the Directory information on the website there was a listing for Samuel Nunney who was the mole catcher, or one of the two mole catchers, listed for Old Whittington.

When I heard the surname Nunney I immediately thought of the memorial window in      St Bartholomews Church and wondered if there was perhaps a connection.

A researcher friend, Elizabeth Pemberton, sent me some snippets of information about Samuel, which sparked my interest and I thought I would find out a bit more about Samuel Nunney and Peter Nunney who is commemorated on the window.

Samuel was born in Sheffield and according to the 1861 census he first came to New Whittington with his mother and stepfather, and his occupation was coal miner, same as his stepfather.

In 1865 Samuel married Mary Jane Hunt from Middlesex. Mary had lived with her grandparents in Old Whittington since at least 1851. Mary’s grandfather Richard Moody was a molecatcher, and her grandmother was Dorothy Moody (nee Mettam).

Mole catcher jobs were considered highly prized and were normally kept, as far as possible, within the family. Mole catchers were respected and revered amongst the farming community. As well as payment for catching the mole the mole catcher could make money from selling the mole skins for clothing! Luckily, this is a practice that is no longer continued.

On 26th February 1870 the Sheffield Daily Telegraph announced that Samuel had been appointed as one of the Parish Constables for Old Whittington, the other being Joseph Syddall . His appointment lasted for a year, it was an unpaid position, and he would be expected to continue his day job at the same time. The Parish Constable performed all of the main duties associated with local policing for example:

The 1871 census shows that Samuel was no longer a coal miner but was now a molecatcher and grocer. His wife’s grandfather had died in 1866 and it would appear that the family tradition of mole catcher has been passed on to Samuel. The 1871 census also had an entry for Mary E Mettam (listed as a cousin) who was living with Samuel and Mary and their three children.

On 5th December 1874 there was a report in the Derbyshire Times regarding a complaint made against Samuel Nunney for assault. The person who made the complaint was Amy Mettam, the mother of Mary E Mettam. It would seem very out of character for Samuel to be in trouble as everything else proves him to be a well respected member of the community, however reading the newspaper report Samuel was completely exonerated from the charge against him.

Samuels name appeared in the local papers many times over the following years but normally in conjunction with problems with his job as a mole catcher. One example is the following report from the Derbyshire Courier 5th June 1875.

Samuel was a very busy member of the Whittington community and the Sheffield Daily Telegraph April 1st 1876 reports that he had been nominated for the position as an Overseer of the Parish.

Kelly’s Directory for 1891 has an entry for Whittington and Samuel Nunney is still working as a mole catcher, but is now listed as mole catcher to the Duke of Leeds. (The full Directory entry can be read at https://oldwhittingtonops.com/kellys-1891-directory/ )

This may well be the position that Samuel inherited from Richard Moody, but this is the first mention of the role that I have found so far.

By 30th July 1887, the role of the mole catcher was starting to disappear as other methods were introduced to kill moles, which would be cheaper and quicker than employing a mole catcher.

This entry from 30th July 1887 shows the parishes that Samuel normally worked for, those that came under the jurisdiction of the 1Duke of Leeds, were slowly terminating their agreements with him. 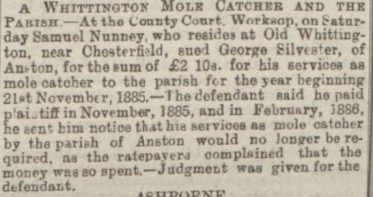 I finally found the link between Samuel and Peter Nunney, Samuel was Peters grandfather.

Peter Nunney was born early in 1921, his parents were Samuel Nunney and Bertha Taylor. In 1911 Samuel and Bertha were living on Sheffield Road Whittington Moor and had one child, Marjorie, born in 1910. The family eventually moved to 95 Manor Road at Brampton.

Peter Nunney joined the Merchant Navy as a ships carpenter. In May 1941 he was serving on MV British Security which was operating in the North Atlantic as part of the Atlantic Convoys. 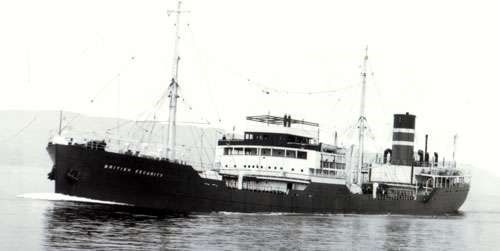 On 20th May MV British Security was on route from Curacao-Halifax (NS) -Bowling in convoy HX-126, carrying 11,200 tons of benzine and kerosene. She was torpedoed South of Cape Farewell in the North Atlantic by 2U-boat 556 and all 53 crew members were lost. Two other ships were lost on 20th May Darlington Court (28 lost) and Cockaponset, the crew and master were saved and picked up by another vessel.

In 1947, after what looks like some discussion, a memorial window was unveiled in  St Bartholomews church Old Whittington. 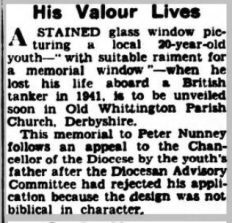 The memorial window in St Bartholomews church would seem a very fitting tribute to a very brave young man.

Peter Nunney is remembered on the Tower Hill Memorial in London. 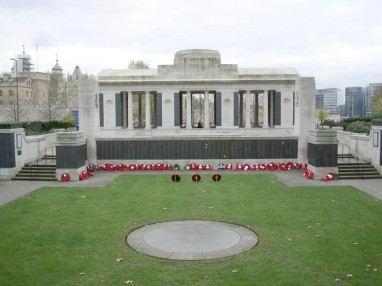 1The Duke of Leeds(at the time the Earl of Danby) was one of the conspirators at the Cock and Pynot Inn in 1688.

2U-Boat U556 was sunk on 27th June 1941 by three British Corvettes, the crew abandoned ship, but five members were lost.