Fred Taylor was born in Old Whittington on 2nd November 1896. The family lived at 28 Prospect Road and Fred was the first child for parents Joseph and Elizabeth, he was baptised at Old Whittington church on 14th February 1897. 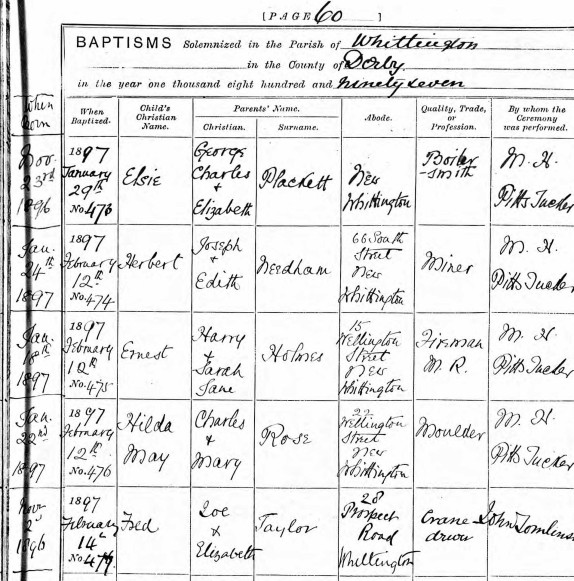 By the time of the 1901 census Joe and Elizabeth had another son, Joe, who was 8 months old in 1901.  The family are listed as living at 28 Prospect Road Old Whittington.

Fred went to school at Websters Endowed school Church Street Old Whittington, he started in March 1901 and left in January 1905. Presumably at that point he moved up to the Junior school.

His is the last name on the Admission log, directly above Fred is listed George Thorne who also went away to fight and is now listed on the War Memorial near his old classmate!

The 1911 census shows that Joseph and Ellen had another son Albert born in 1908, sadly it also shows that the couple had four children in total, but two had died. Joe, who was listed on the 1901 census, sadly died in June 1901 aged 10 months old.

The family moved at some point between the two censuses as they now are shown as living at 82 Prospect Road.

By 1911, Fred at the age of 14 has already left school and is working as a polisher at a Cabinet makers. A completely different occupation to his father who was still working as a crane driver probably at Sheepbridge.  According to a report in the Derbyshire Times at the time of his death, Fred was an enthusiastic member of the Whittington Boy Scouts group!

The Boy Scout movement started in England in January 1908 and was founded by Robert Baden Powell.  By the end of 1908 there were over 60,000 members.  A boy could become a Scout between the ages of 11 and 15, Fred may have been amongst the first boys to join the movement.  Whilst the Scouts had lessons in tracking and observation and played elaborate games, they were also taught the importance of morality and good deeds. They were organised into small groups under a leader, the patrol and patrol leader.  This would no doubt stand Fred in good stead for when he later joined the army. To become a Scout Fred would have had to promise to be loyal to his country, something he would have to put into action not too many years later!

Baden Powell and Scouts in 1908

Fred enlisted on the 17th May 1915, he joined the 16th Battalion Notts and Derbyshire Regiment, Chatsworth Rifles.  His service number was 26155. On his Attestation form below he stated his occupation as a Wagon Builder, possibly  he could have worked at Chatsworth Wagon Works, very close to where he lived at Prospect Road. 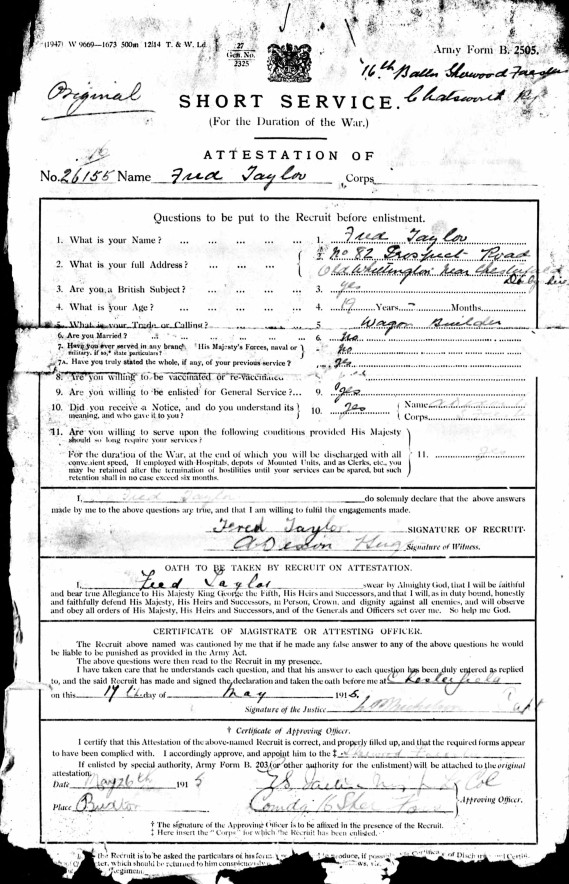 Fred’s medical history form describes him as 5ft 4” weight 110 lbs and physical development ‘fair’.  I would imagine him as quite a slightly built young man from that description.

The 16th Battalion was primarily a Territorial or Home force,  raised at Derby by the Duke of Devonshire and Derbyshire Territorial Force Association on 16th April 1915.  The Battalion moved to Buxton 4th May 1915, Fred joined them there on 17th May, and then on to Redmires near Sheffield.  September they moved to Winchester and came under the orders of 117th Brigade in 39th Division. Later that month they moved to Aldershot and  then Witley Camp.  This is all well documented and confirmed in Fred’s service record below. 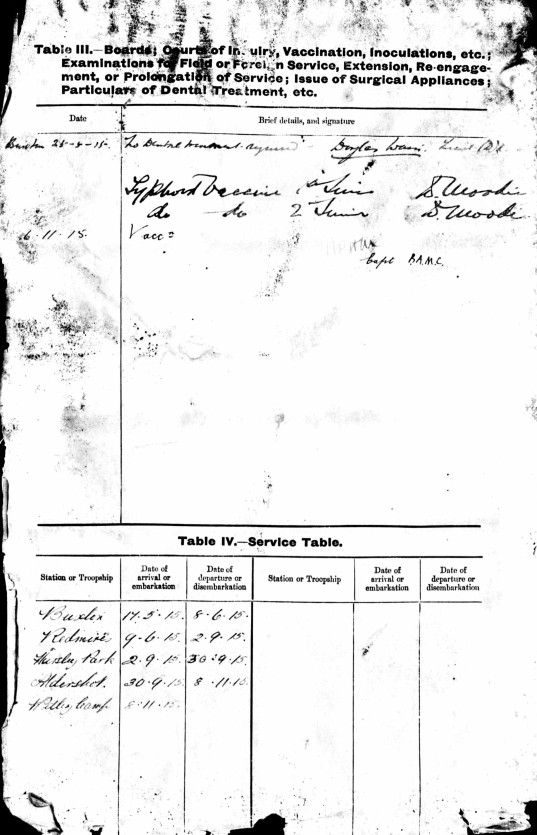 From the War Diaries – The Battalion was sent overseas on 6th March 1916, landing at Le Havre on the 7th.  They were taken by train to Steenbecque in Northern France. They left Steenbecque on 13th March and marched to Estaires (approx. 14 miles), on route they were inspected by Lieut. Gen. Sir W P PultenenyKCB DSO Commanding III corps 1st Army (who survived WW1).

The following day they were on the march again to Sailly where they rested until 19th March when they returned to Estaires.

As I have no record of which company Fred was attached to I can’t definitely say on what date he would have had his first taste of being at ‘the front’.  He would have been in the trenches at some point between 19th and 24th March 1916 when the four companies were relieved.

Fred was on the move again and on 28th March 1916 at 3 pm the Battalion arrived in Bethune. 29th March they marched  to Annequin South approx. 5 miles from Bethune and took their places in the trenches in the Auchy section. They were relieved on the 30th.

1st April and Fred would be back in the trenches again and sadly on 2nd April he was killed in action. The war diary reports that one man was killed and four wounded by rifle grenades.  I can only assume that man was Fred Taylor. ( A rifle grenade is literally a grenade launched from a rifle in order for it to go further than if  it was thrown by a man).  Fred was 19 years old and had been in France for a matter of weeks!

The Casualty form below confirms he was killed ‘in the field’ on 2nd April 1916 it also confirms that Fred left Southampton on 3rd March 1916, not the same date as the War Diary stated, but he was only in France for just over 4 weeks. 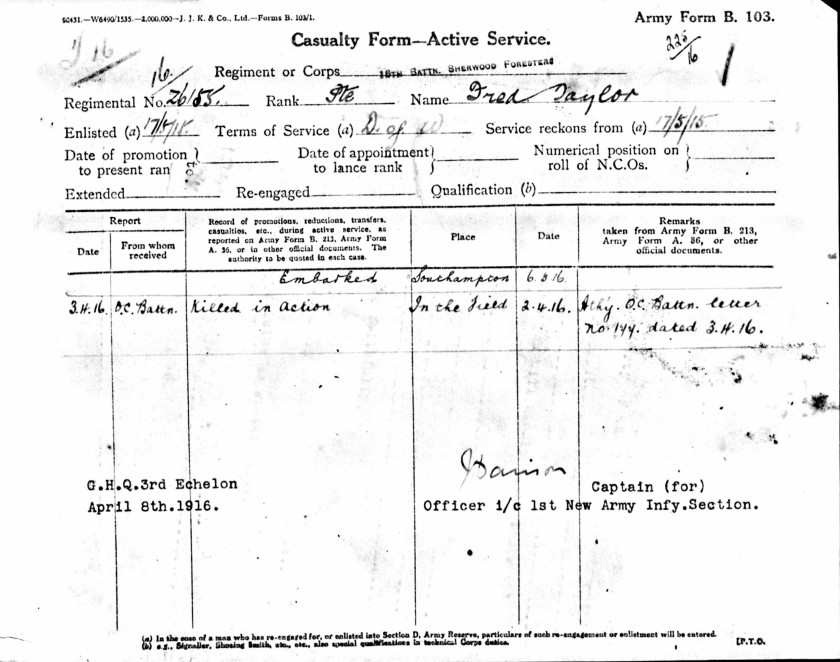 The Derbyshire Times 22nd April 1916 gave a report of Fred’s death, below is a transcription (with some spaces due to illegible copy).

At the early age of 18 years, Private Fred Taylor of the Sherwood Foresters has been killed.

The information was conveyed to his mother, who resides at  82 Prospect Road Old Whittington, by Captain W G Constable. Before enlisting ..?…?…..Taylor was an enthusiastic Whittington Boy Scout, and had only left for the Front some five weeks ago.  Writing of him his Captain says, “Please accept all my sympathy in the great loss that has befallen you in the death of your son. I know how great is the burden you have to bear, but it may be a slight consolation to  you to know that he died doing his duty, and that you have the sympathy of all of his comrades. He was very popular with all of them, and I regarded him as one of my best men. Only two days before his death he was given a piece of work to do which called for grit and endurance, and he showed himself in every way worthy of the choice.  His conduct as a man and a soldier will be an example to all of us”.”

Even though Fred had only been in France a few weeks he was obviously greatly thought of by his fellow comrades and was a very brave young man.

Fred is buried in Cambrin Churchyard extension near Bethune.  More information can be found here

The grave registration report records that Fred had been a Patrol leader in the Boy Scouts, and it would seem that his parents were quite rightly proud of his achievements.

‘Sleep on beloved one’

Fred’s personal effects were returned to the family in July 1916, and comprised 2 wallets, 1 cap badge, 1 pouch, letter card and photos.

Fred was awarded the Victory and British War Medals and these were sent to his family and signed for by his father Joseph.

Fred is commemorated on Old Whittington and the Brushes War Memorials.

Fred’s parents, Joseph and Elizabeth, were still living at  82 Prospect Road  Old Whittington when the pre-war 1939 register was taken. 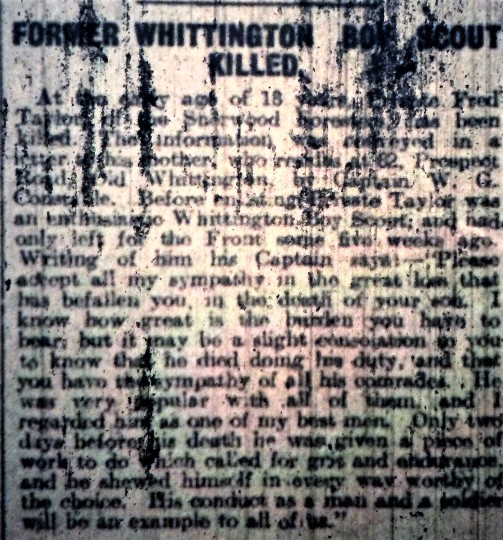 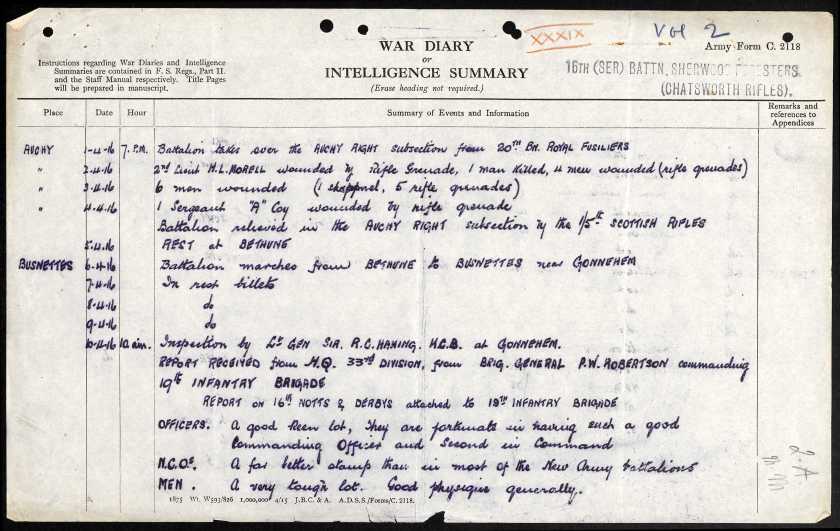