Joseph Norton was born in 1887 in West Bromwich Staffordshire. His parents were Joseph and Hannah (Gerrison) Norton and the couple already had two older children, James and Polly.

By 1891 the family had moved to Brimington in Chesterfield, and were living at Back Street Brimington. Back Street was renamed as Hall Road, but in 1891the Back Street area had rows of terraced houses, a school and a pub named the Bugle Inn.

As can be seen from the 1891 census, two of Joseph’s uncles also lived at Back street, William Norton and John Gerrison who had all moved from West Bromwich to Chesterfield.

Sadly for the family Joseph’s mother, Hannah, died in 1891.

By 1901 the family had moved house, but not too far, and were living at Pondwell Brimington.

There is another brother for Joseph, John Thomas who was born in 1891, another uncle is now living with the family, James Jerrison. It’s hard to be certain from the census whether Joseph at 14 has left school or not.

In 1905 the family were to have another loss when Joseph’s father died.

By 1911 the remaining family were living at 17 Cavendish Square Sheepbridge. 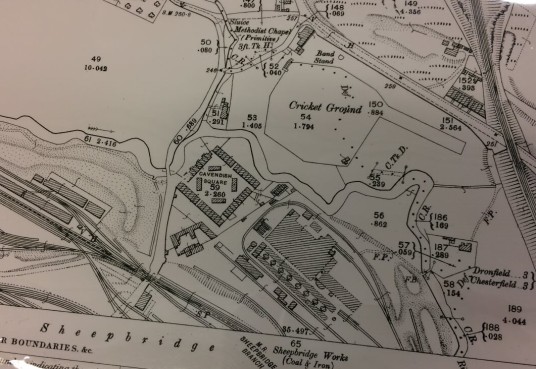 Joseph was now 23 years old and working as a labourer at the Iron Works. He was lodging in the household of Ernest Bamford along with his brother John Thomas and his uncle William Norton, who also worked at the Iron Works.

Ernest Bamford was married to Josephs sister Mary (Polly), at least the family had managed to stay together after Joseph’s fathers death.

With the outbreak of war Joseph enlisted in the Notts and Derbyshire regiment, regimental number 23172. I cannot find a record of the Battalion he joined but at some point he was transferred to the 2nd Battalion Cheshire regiment. Unfortunately, it has been quite difficult to follow Joseph’s army career as the service records no longer exist. According to his medal card he arrived in France on 15th July 1915, whether he was in the Sherwoods or the Cheshire Regiment I cannot definitely confirm. The 10th Battalion Notts and Derbyshire arrived in France on 14th July 1915 and there were several other Old Whittington men in that Battalion, however that is just a possibility.

The Battle of Loos took place between 25th September – 15th October 1915. This was the first major offensive and was referred to as ‘the big push’. The 2nd Battalion Cheshires were under orders from 84th Brigade 28th Division.

Loos as it was before WW1, dominated by pit winding gear known by the British troops as ‘Tower Bridge’. Loos was very much changed after the war.      Picture www.longlongtrail.co.uk

The 28th Division were moved South from Ypres and entered the Loos area on 27th September as part of the First Army, commanded by Sir General Douglas Haig. There would already have been heavy casualties on the Loos battlefield before Joseph arrived on the 27th September. This excerpt taken from the Long Long Trail website outlines what Joseph would have experienced. There is more information on the Battle of Loos at https://www.longlongtrail.co.uk/battles/battles-of-the-western-front-in-france-and-flanders/the-battle-of-loos/

Close fighting is renewed in the Hohenzollern Redoubt, and all but Big Willie Trench is lost to the enemy. 12th (Eastern) Division relieves 1st and 2nd Guards Brigades in area of the Chalk Pit. They are put to work on completing preparations of new trenches, roads and positions in preparation for the assault. Heavy enemy shelling causes many casualties among the working parties. Major-General Wing, OC 12th Division, is among those killed. The renewal of the offensive is delayed until 6th October, to enable preparatory attacks on Fosse 8 and Hill 70 to take place. Following the days loss of the trenches of Hohenzollern Redoubt, this area takes priority. The 12th and Guards Divisions are ordered to capture the Quarries and the Fosse 8 / Hohenzollern respectively, on 9th October.

At the end of the Battle there were more than 61,000 British casualties, 7,766 of these men died. Joseph Norton was one of these men, he was assumed Killed in Action on 3rd October 1915, he was 28 years old.

Joseph’s body was never recovered and he is remembered on the Loos memorial. The Loos memorial commemorates over 20,000 men and officers who have no known grave. 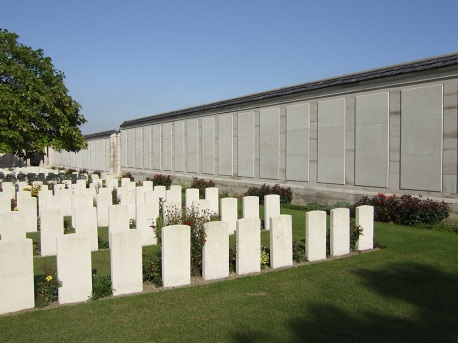 Information on Loos memorial can be found at https://www.cwgc.org/find-a-cemetery/cemetery/79500/loos-memorial/

Joseph was awarded the British War and Victory medals and the 14/15 Star. 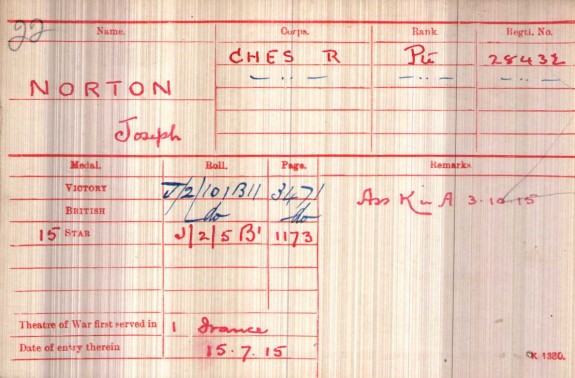 Joseph Norton is remembered on the Old Whittington and Brushes war memorials. 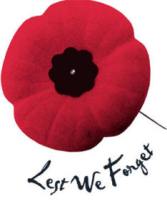