The family lived at Church Street Old Whittington and Charles mother Mary had been a widow when she married Thomas Leggitt.  Mary’s first husband was Thomas Loomes, and Charles had four older step brothers.  Robert, Thomas, Christopher and Arthur Loomes.  Robert and Christopher both enlisted during WW1, this may have been an incentive for Charles to join up to emulate his older brothers.

The 1901 census shows that the family lived at 99 Church Street and Thomas Leggitt was a Coal Carter.  Charles was now 4 years old and had been joined by a younger brother Reuben. The 1901 census was taken on 31st March 1901, just a couple of months later Mary Leggitt died leaving Thomas, at 59 years of age with two young sons.

By 1911 Charles was living at 78 Church Street and at 14 years old was a Farm worker.  Thomas, now a widower, is out of work and younger son Reuben is at school.  The other boys have all  left home.  Thomas has entered on the census that three children were born to his marriage to Mary.  After checking the couple had a daughter Mary, born in 1897 and baptised on 4th December 1897.  Sadly, the baby died later that month.  By 1911 Charles had lost his mother and a baby sister. 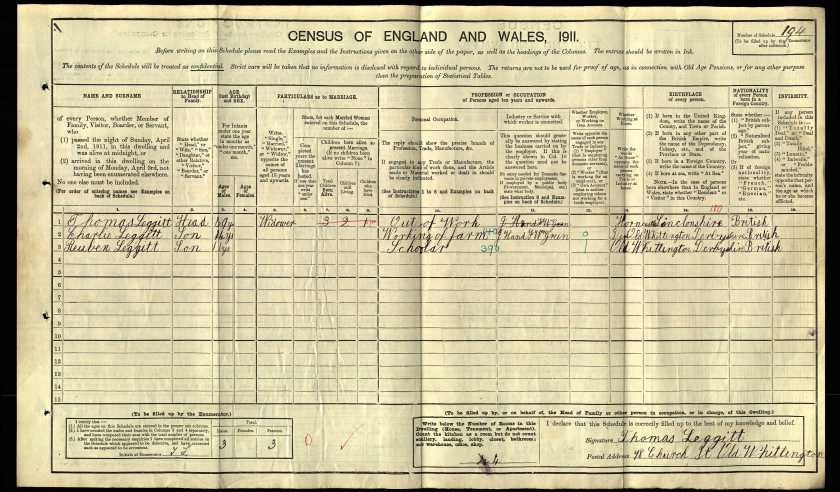 At some point Charles changed his occupation from farm worker to working in the furnaces at Sheepbridge Works, this is confirmed by the newspaper article announcing his death.

There is no recorded date for Charles’s enlistment but the 16th Battalion wasn’t formed until April 1915.  Unfortunately Charles’s medal card hasn’t been recorded either with the date he entered a Theatre of War.  However, a newspaper report in the Derbyshire Times confirms the date he joined up was May 15th 1917.  He arrived in France on August 29th.

The 16th came under orders of 117th Brigade, 39th Division from September 1915,  during 1917 the 39th Division were involved in stages of the Third Battle of Ypres :

The Battle of Polygon Wood, 26 September – 3 October 1917 more information –at

The Second Battle of Passchendaele, 26 October – 10 November 1917 more information –at

I imagine he would have been involved in some of the stages of the  above battles.  All of them fought in terrible circumstances as the excerpt below confirms.

31 July – 10 November 1917: the Battles of Ypres, 1917.. The British finally got what they had wanted since 1914: the opportunity to attack at Ypres and breakout of the confines of the salient of trenches around it. Often known as the Third Battle of Ypres or Passchendaele, the offensive began with encouraging gains but terrible summer weather soon bogged it down. By August the offensive was clearly failing in its objectives and had descended into attritional fighting. New techniques by both sides led to agonisingly slow forward movement for the British, at enormous cost in casualties to both sides. Bad weather in October led to the battlefield becoming an impossible quagmire.

The map below shows the gradual Eastwards Advance from Ypres.

Charles was killed in action on November 5th 1917, approximately 20 weeks after arriving in France, he was 21 years of age.

As with many of his fellow soldiers Charles’s body was never recovered and he is remembered on the Tyne Cot Memorial.  Information on Tyne Cot can be found here

Charles is remembered on one of the Panels. The names are carved on the memorial on panels of Portland stone, set in high flint walls which have been built in a half circle.

A report in the Derbyshire Times 24th November 1917 reads as follows:

Official news has reached Mr and Mrs Leggitt 104 Church Street Old Whittington that their eldest son Pte. Chas. Leggitt Sherwood Foresters was killed by shell fire on the 5th inst. Pte. Leggitt was only 21 years of age, and a letter written on the eve of his birthday stated that he had not enjoyed the day, being engaged all day digging in the trenches.  Pte Leggitt joined up on May 15th this year, so that he had only been in the Service about 20 weeks previous to meeting his death. After training at Saltfleet he crossed to France on August 29th. Previous to joining he was employed at the Sheepbridge companies furnaces.

Charles was awarded the British War and Victory Medals.  There is further confirmation that he did not arrive in France until at least 1916,  as Charles was not awarded the 14/15 Star Medal, this was awarded to all men who fought in any Operational Theatre of war before 31st December 1915.

As can be seen from the medal card the medals were returned at some point, below is an explanation of the remarks entered –

‘Medals which, at the end of 10 years, still remain unclaimed, will be sent to the India Office (if granted for India service), or the deputy director of ordnance stores, Royal Dockyard (Medal Branch), Woolwich (if granted for other service) to be broken up’

‘8149 / Adt’ would suggest that they had been returned for adjustment,  an error in the engraving as opposed to the recipient having moved from the given address.

Charles is remembered on Old Whittington and The Brushes War memorials.

Thomas Leggitt, Charles’s father remarried in 1912 to Harriet Ward of Dronfield, he died in 1921.  Charles’s step brother Robert Loomes was injured in WW1 but returned home and continued to live in Old Whittington.  Christopher Loomes was sadly one of the men who never returned to the village he was awarded the DCM and his story along with all the other men who never came back can be found on https://oldwhittingtonops.com/loomes-christopher-dcm/