Frederick Mitchell was born on 25th March 1886. His parents were Thomas Crossley Mitchell and Emma (Wilson) Mitchell. Neither parents were native of Whittington, Frederick being born in Wakefield and Emma in Bingham Notts, however both ended up living in the Whittington area. When Frederick was born the couple already had two daughters. Frederick would have had an older brother, there had been a son born in 1882, Thomas, who sadly died in 1885 and was buried in Old Whittington churchyard on March 16th 1885.

Frederick was baptised at Old Whittington church on 23rd April 1886. The baptism record shows that the family were living at Wellington Street New Whittington and Thomas was an engine driver, later confirmed as a railway engine driver.

By the time of the 1891 census the family were living at 20 William Street Old Whittington and all of the Mitchell children (apart from Dorothy) are listed as scholars.

As Frederick is referred to as Fred above I will continue to do the same.

At some point prior to 1898 Fred’s mother Emma passed away, and on 5th April 1898 Fred’s father married Elizabeth Smith.

The 1901 census shows that the family had moved again and were now living at 33 Prospect Road Old Whittington. Fred had left school and was working as a stable boy, at 15years old, his two older sisters had already left home.

By 1911 Fred had left the family home and also changed his occupation. In 1911 he was working as a coal miner (hewer).   Fred was in lodgings back at Wellington Street New Whittington in the home of Walter Wilton also a coal miner. Possibly he could have been a workmate.

The Hewer was the man at the coal face who actually dug the coal out. 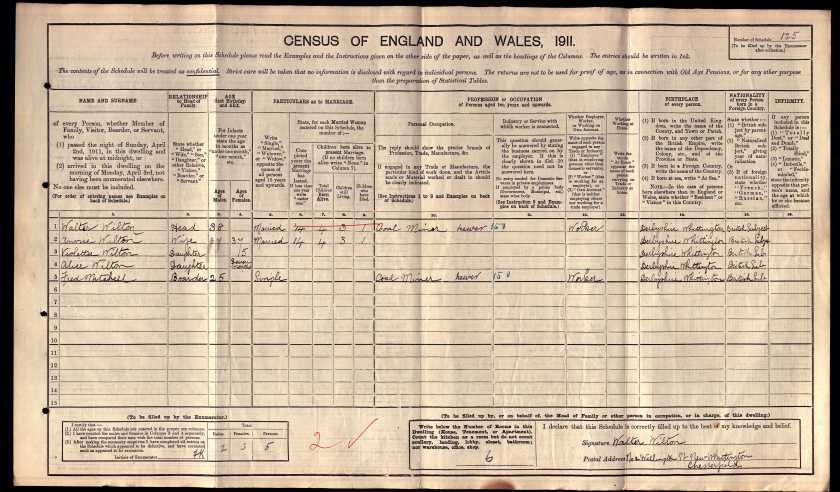 The obituary for Fred in the Derbyshire Courier reports that he was a Reservist. A Reservist is someone who has served his term in the army and either agreed to re-join in an emergency or someone who after his period of service had joined the Reservists for a specified term. As there are no Service records, Fred’s Service record, along with many others, was destroyed in a German bombing raid on the War records office in London in 1940 and the census doesn’t indicate he was serving in 191, more likely he had probably served in the Territorial Force, again there is no way of confirming what Fred’s military history was.

According to his medal card Fred arrived in France on 10th October 1914, he was awarded the 14/15 Star medal when he was in the Sherwoods which could indicate that he left the Sherwoods after 31st December 1915. However, that is only an assumption. Without knowing which regiment he was in it is hard to record which battles he would have taken part in.

Fred’s obituary does report that he took part in the ‘Retreat of Mons’, when the Allied army was overwhelmed by 750,000 German troops. As he arrived in October 1914 he quite possibly took part towards the end of the retreat in an action called ‘The race to the sea’.

The Retreat from Mons and the Race to the Sea (which ended at the town of Ypres) led to the First Battle of Ypres 19th October-22nd November 1914. Fred would have been in the thick of all this action and certainly would have taken part in some heavy fighting. More information of this Battle can be read  at

Fred was transferred to The Royal Engineers Railway Division at some point of the war, but it is difficult to give an exact date. When Fred changed regiments (for whatever reason) he joined the Royal Engineers under Regimental number 198298. His medal card also shows the number WR/125550 this indicates that he belonged to the Waterways and Railway troops.

The railway operating Division was formed in 1915 to operate the railways in the Theatres of war their three main functions were;

The Railway division normally consisted of Railway employees. Freds father was a Railway engine driver, whether Fred changed his occupation between the 1911 census and joining up we may never know. (I have checked the available records of railway workers, they are few and far between, there is a Frederick Mitchell working for Midland railways but in 1910 which wouldn’t tally with the census record for 1911).

Fred died of his wounds on 30th May 1918 and is buried at Longuenesse (St. Omer) Souvenir Cemetery. More information can be found  here

Fred was 33 years of age when he died. 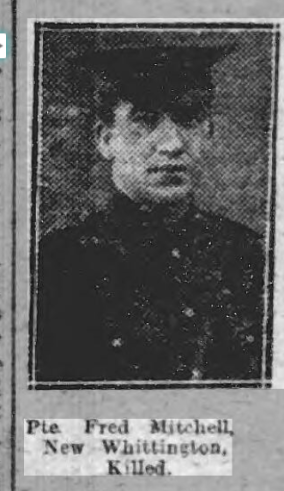 According to the obituary in the Derbyshire Courier Fred’s Commanding Officer wrote to the family with details of how he died:

“He was killed by an enemy bomb on the night of May 30th, and his death was instantaneous as he was asleep at the time”. The writer also said, “ The deceased was a fine soldier and greatly liked by all who knew him and that he would be much missed”.

Fred’s father died in 1917, consequently it was Fred’s eldest sister Elizabeth who dealt with the inscription on Fred’s memorial.

The inscription on Fred’s grave reads

Fred’s medal card shows that he was awarded the 14/15 Star medal along with the British war and Victory medals. 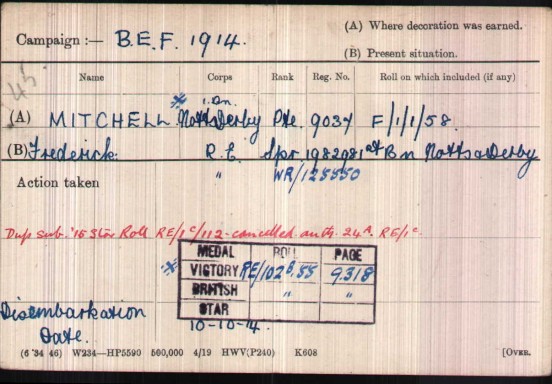 Fred is remembered on Old Whittington and the Brushes War memorials as well the memorial in New Whittington.

There is a mention of a wife in the obituary, however I have found no records so far that relate to a marriage, and Fred’s Personal Effects were left to his siblings.