Since researching Herbert’s story I have been in touch with a descendant of Herbert, Gordon Richards, who has been researching his family history.  As family recollections give a personal insight where internet research cannot always I have posted Gordons research, with his permission, followed by my own.

Born in Kilburn Uncle Herbert is recorded in the 1901 Census at the age of 6 living with his Grandparents Joseph Gaunt and Mary Ann Belfield at 202 Rawson Green Kilburn Derbys.

In 1911 after his Grandparents had passed away he is recorded as living with his Single Aunt Charlotte Gaunt in Rawson Green Kilburn. He remains close to his Aunt Lottie (later married name Piggott) and lists her in his Army Will. His last address is recorded as “Laburnam Cottage, Station Rd, Kilburn” with his Aunt Charlotte Piggott.

Promoted to Corporal in July 1916, shortly after transfers to the 2nd E.Yorks regiment Number 27734.

His service with the E.Yorks regiment probably covers duty in France in addition to a tour of duty in 1916 to Salonika, (Thessalonica Greece) prior to his final tour return to the Salonika theatre in 1918.

He leaves for Salonika in July 1918, and is wounded by a Shell on August 27th He is admitted to a Field Hospital where his right arm is amputated on 29th August. Severely injured with fatal wounds affecting his Lungs, he is transferred on the Hospital Ship “Gloucester Castle” back to England on 12th December 1918 and admitted to Heald Place Military Hospital in Manchester where he dies from his wounds on Jan 1st 1919.

Uncle Bert was fatally wounded in the run-up to the following action:

* The Capture of the Roche Noir Salient (1- 2 September)

At the beginning of 1918 the Allied troops in Salonika were prepared for a major offensive intended to end the war in the Balkans. The Greek Army had been reorganised and joined the Allied force. The offensive began in July 1918 but the British contingent did not play a significant part until early September. Then the British attacked a series of fortified hills. The final assault began along the whole front on 15 September 1918; the British being engaged in the Lake Doiran area. This battle was really on the 18 and 19 September 1918 and was a disaster for the British Divisions. They had to frontally assault ‘Pip Ridge’ which was a 2000 foot high heavily defended mountain ridge with fortresses built on some of the higher mountains, notably Grand Couronne. (This was what the Bulgarians had been working on in the first months of 1916 and early 1917.) They sustained very heavy casualties.

The 2nd East Yorks Regiment War Diaries for this period are proving elusive, but the search goes on. I believe the Regiment was probably absorbed into a larger force structure prior to the final engagements in 1918 Salonika

He is buried in St Clements Horsley Derbyshire, with a dedication on a plaque to the E.Yorks regiment in York. His grave in Horsley is recognised by the War Graves Commission.

A family story covers the time Uncle Bert was transferred back to England after he was wounded in 1918. The story goes that while being transferred to Hospital in Manchester the train passed through Chesterfield. Bert took the opportunity to tie a note to a uniform button and threw it from the train. The Note said “ Anyone finding this please take it to Cavendish St and let my Mother know I am still alive”.

Gordon also supplied a newspaper cutting from the Derbyshire Times in 1919. 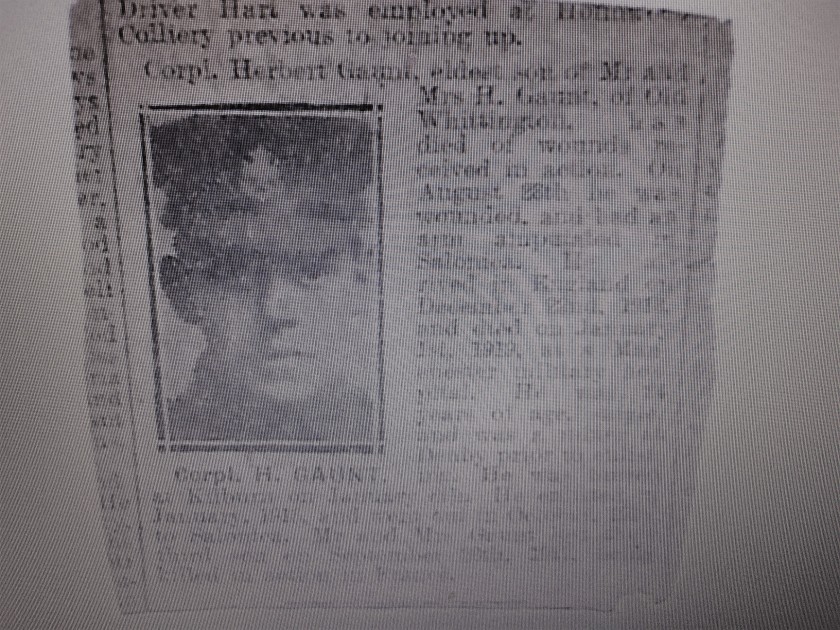 “Corporal Herbert Gaunt eldest son of Mr and Mrs H Gaunt of Old Whittington has died of wounds received in action. On August 28th he was wounded and had an arm amputated in Salonica. He arrived in England on December 22nd 1918 and died on January 1st 1919 at a Manchester Military Hospital. He was 24years of age, single, and a miner at Denby prior to enlisting. He was buried at Kilburn on January 6th. He enlisted in January 1915 and went out October 1916(?) to Salonica. Mr and Mrs Gaunt lost their third son on September 28th 1917 being killed in action in France (?)”

Herbert was born in 1894 in Derbyshire. He was the eldest child of Herbert Henry and Martha Ann who lived at Rawson Green near Kilburn. Herbert was baptised on 6th October 1895 at Horsley Parish Church. 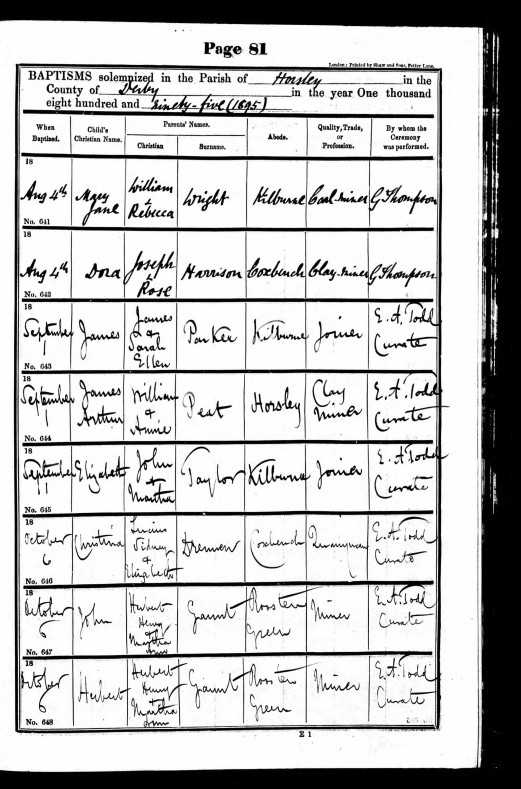 As you can see from the Register his younger brother John was baptised at the same time.

By 1901 the family had moved to Old Whittington Chesterfield however, Herbert had remained with his paternal grandparents and was living at 202 Rawson Green.

Herbert’s grandfather Joseph worked at the colliery (above ground) and also living at the same address was his wife Mary, Charlotte their daughter, classed as a housekeeper and Herbert’s aunt, and also another grandchild Elizabeth Bonsall, who was a hosiery worker.

It wasn’t unusual for children to be left with other family members and unfortunately there is no way of checking why this happened in this case.

There are no school records for Herbert available online.

In 1908 Herbert’s Grandfather died and there is a report in Belper News 6th March 1908 reporting that he has five sons, two daughters and many grandchildren and great grandchildren.    Sadly, Joseph’s wife had died approximately 6 years earlier and according to the report Joseph had never recovered from the shock.

Although I have not checked with any original documents, I am confident this is the correct Joseph Gaunt, Mary A Gaunt died in 1902 and after checking through earlier census records they had five sons and two daughters (they also had a daughter who died in 1893).

The next record for Herbert is the 1911 census. 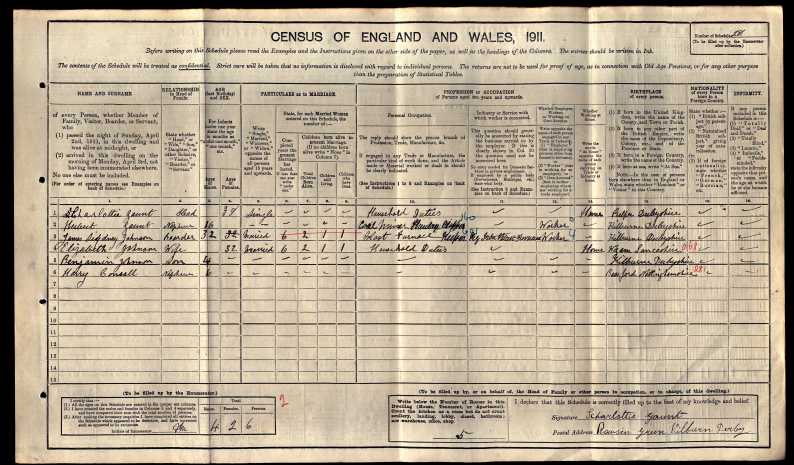 Herbert is still living at Rawson Green but his aunt Charlotte is now the head of the household and Herbert is 16 years old and working as a coal miner Haulage Clipper.  Charlotte appears to have taken in boarders and there is another nephew living with her too.

A description of what a haulage clipper did –

CLIPPER Attached the coal carts to the wire or rope which was used to drag the carts to and from the coal face.

Herbert joined up in Derby on 23rd January 1915, his service number was 22584.  Luckily Herbert’s Service Record is one of the few that has survived.

He enlisted in the Sherwood Foresters he was 20 years and 8 months.  His occupation was listed as a collier.  He was 5ft 9 1/2” and weighed 140lbs. 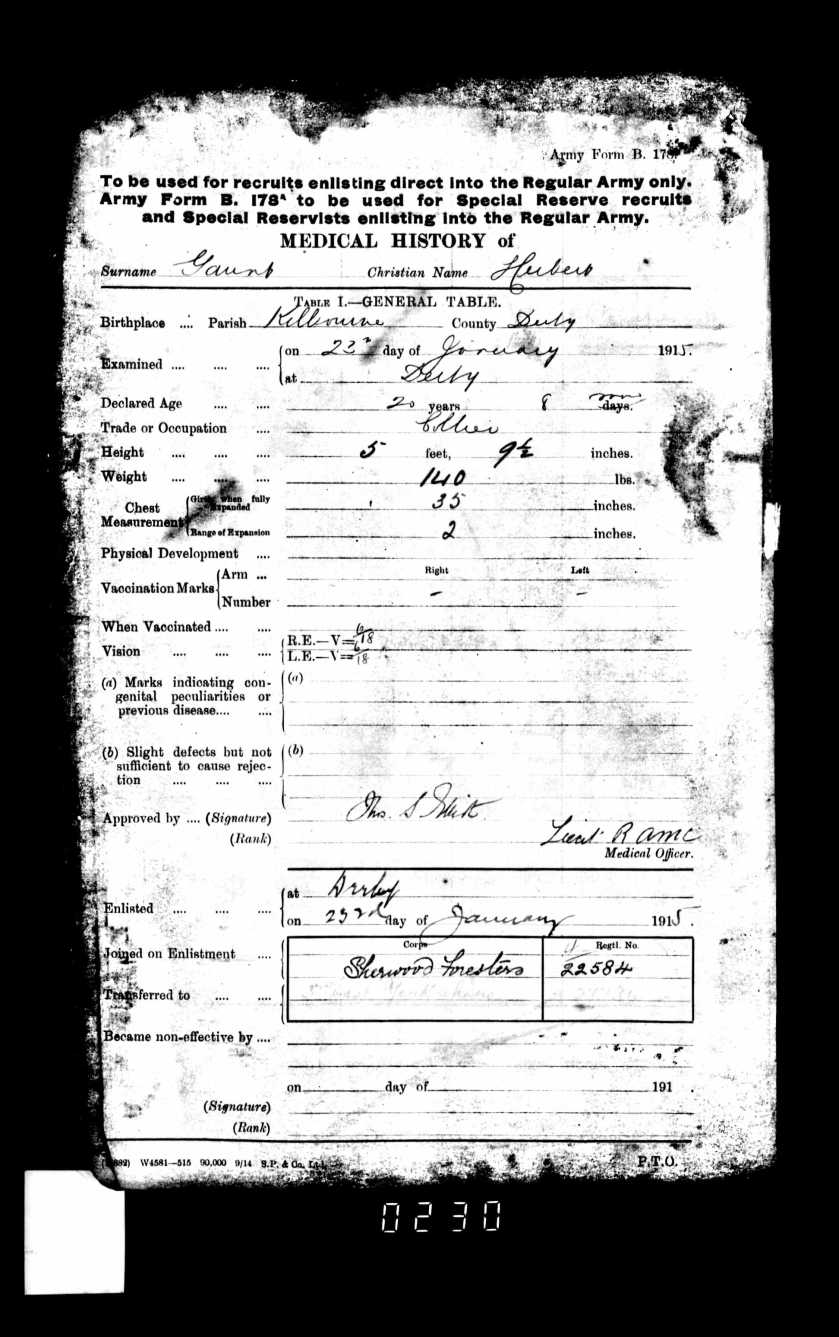 On the record below it appears that at first he listed his father as next of kin but then this was changed  to his Aunt Charlotte who he had spent all of his life with.  Charlotte by this time had married William Piggott on 24th March 1918.  This information was changed 22nd January 1919. 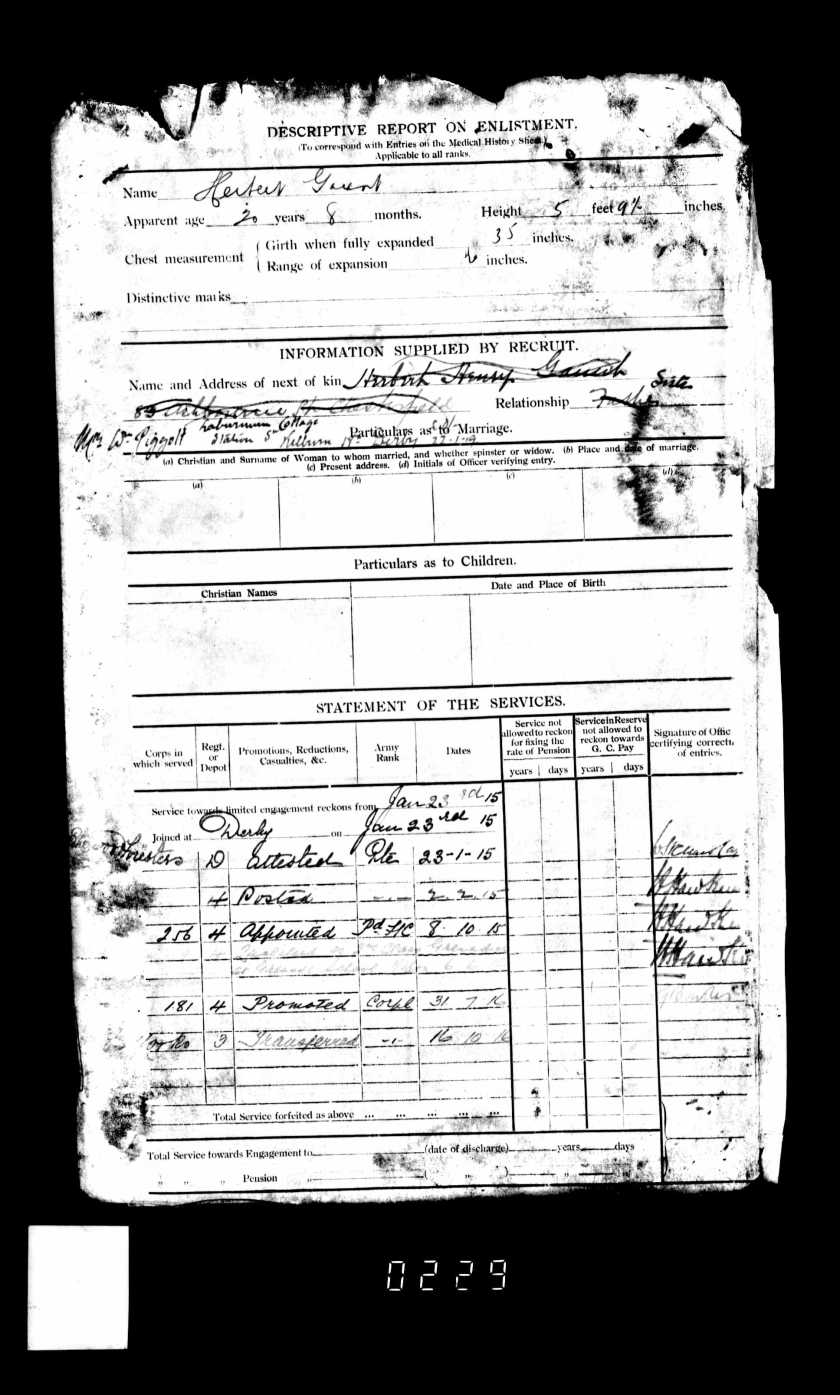 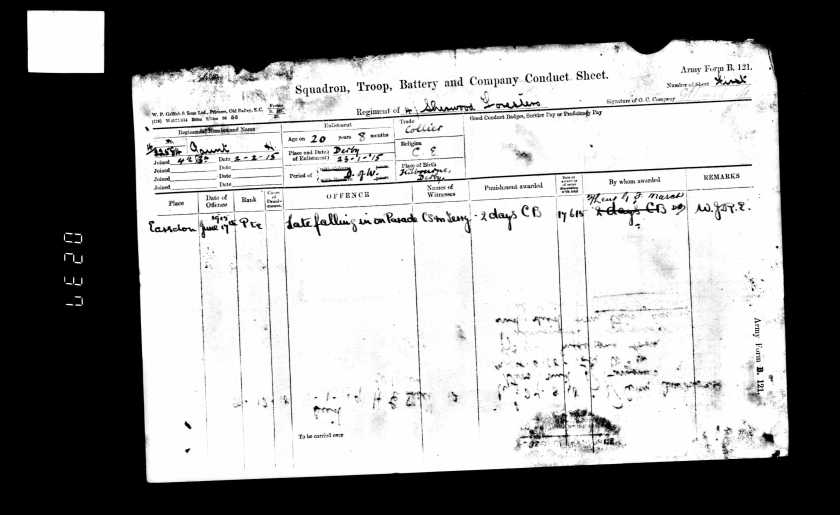 In June 1915 Herbert was late falling in on Parade and was given 2 days Confined to Barracks!  The Conduct sheet confirms that Herbert joined the 4th Battalion Sherwood Foresters however I cannot find a record for the 4th Battalion.  He was in England from the date he enlisted (23rd January 1915) until 3rd November 1916 when he arrived in France.

I have found it difficult to trace Herbert’s war record as the Battalions he is supposed to have been in were not serving in France, but in Salonika. I can only assume that he went to France with the Sherwoods and somewhere along the line transferred to the 3rd Battalion East Yorkshires who at one point during WW1 were the Garrison Battalion at Withernsea.  This would account for his service record stating that he set sail for France from Withernsea!

I cannot confirm when but Herbert definitely served in Salonika. What we now call Thessaloniki Greece, a short history of the Salonika campaign can be read here https://www.iwm.org.uk/history/a-short-history-of-the-salonika-campaign

It mentions in the above report that men suffered from disease in winter and summer, especially malaria.  The men were inoculated against Typhoid, as can be seen from Herbert’s Inoculation records, but I am not sure what precautions were taken against Malaria! 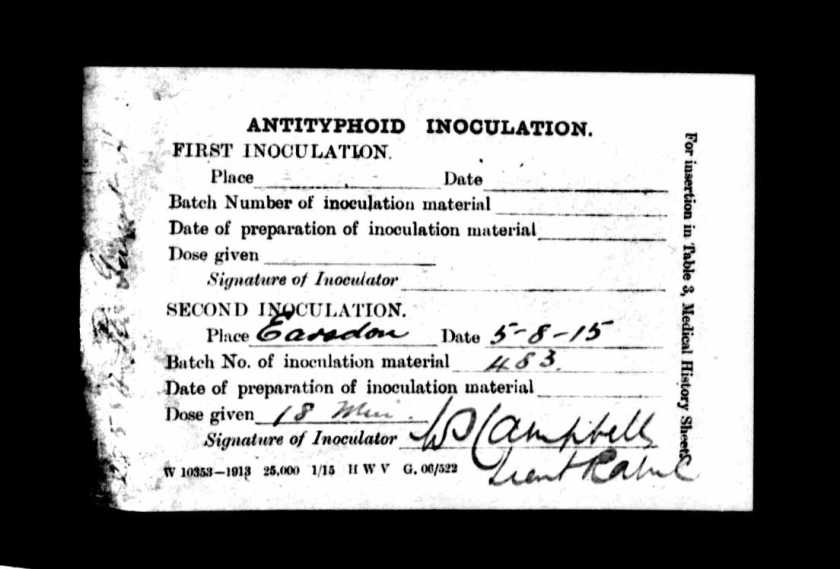 Herbert’s Service records are nearly complete and the Casualty Form below gives a good description of how terrible his last few months of service must have been. 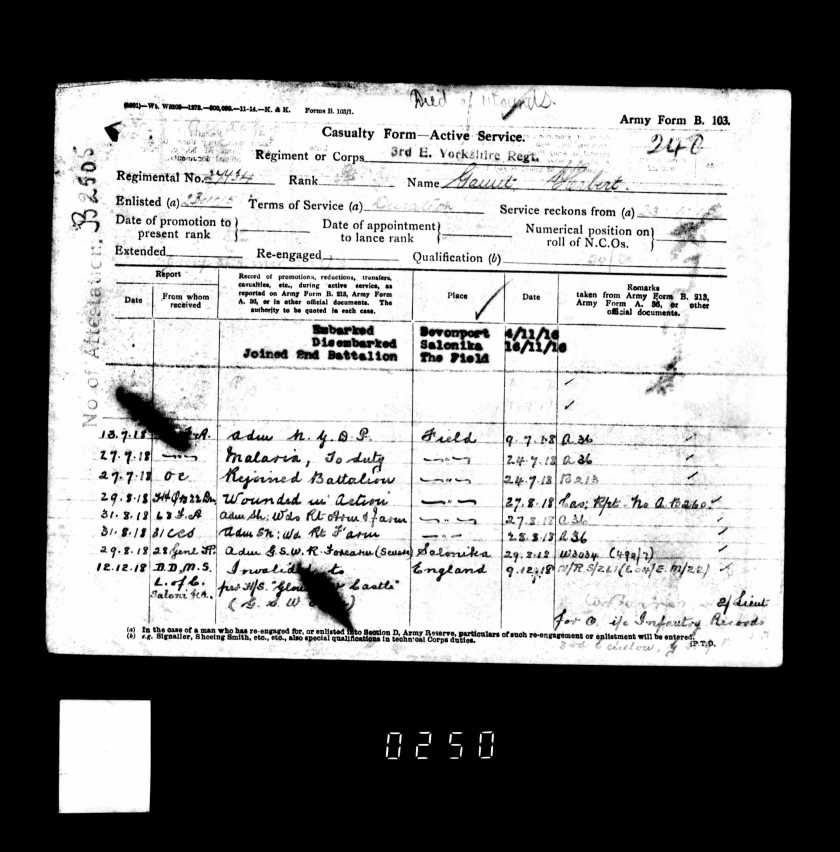 Again it states he was in the 3rd East Yorkshire Regiment, although the Commonwealth War Graves Commission list him as being in ‘C’ Coy 2nd East Yorkshires.  Sadly I cannot confirm for definite which Battalion he was in but the CWGC records are normally fairly accurate.

27th July he had Malaria but was fit to continue serving.  However on 29th August 1918 he was wounded badly in his right arm. His right arm was amputated in August but he does not appear to have been sent back to England until December when he left on the Hospital Ship Gloucester Castle for England.

Upon arrival in England he was transferred to Heald Place Military Hospital Rusholme Manchester.  Heald Place was a school but was taken over for the duration of the war as a hospital. More information on Manchesters Military Hospitals can be found here http://rusholmearchive.org/rusholme-military-hospitals-1914-1918

Herbert died at Heald Place Hospital at 7am on 1st January 1919 he was 24 years old.  According to the report below he was suffering with pulmonary tuberculosis and this was listed as the official cause of death. 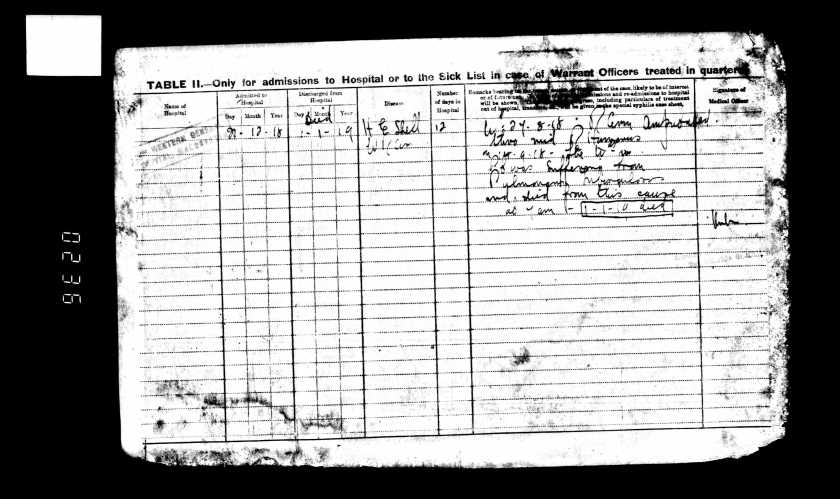 However, as you can see from the telegraph below this suggests he died from the consequences of shell wounds to his right arm. 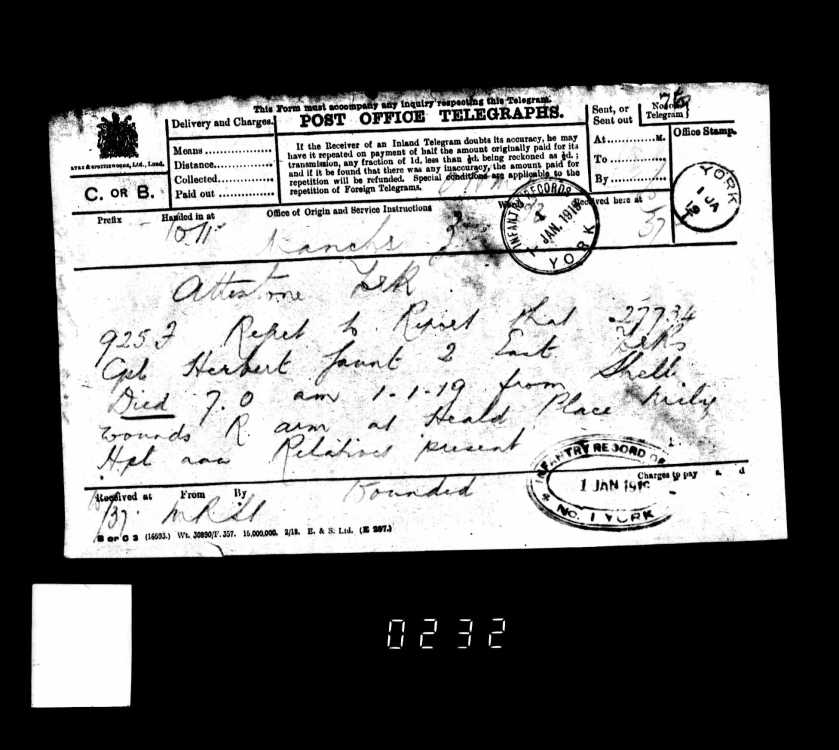 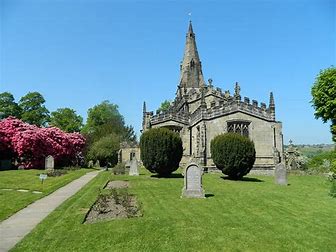 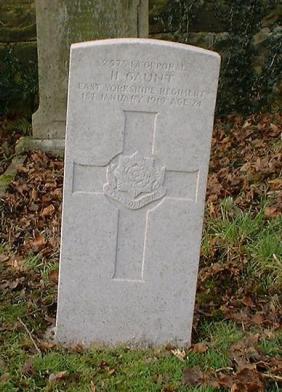 The grave is registered with the Commonwealth War Graves Commission. 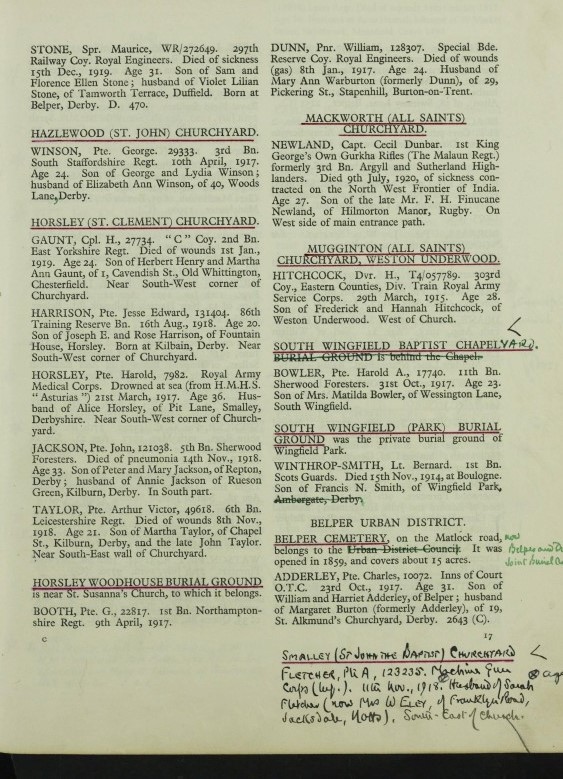 There are several other men who died in WW1 also buried in Horsley (St Clement) Churchyard quite possibly Herbert knew them all.

His property  was returned to his father Herbert Gaunt in Old Whittington and not to his Aunt Charlotte in Kilburn this is surprising as the next of kin details had been changed to Charlotte. 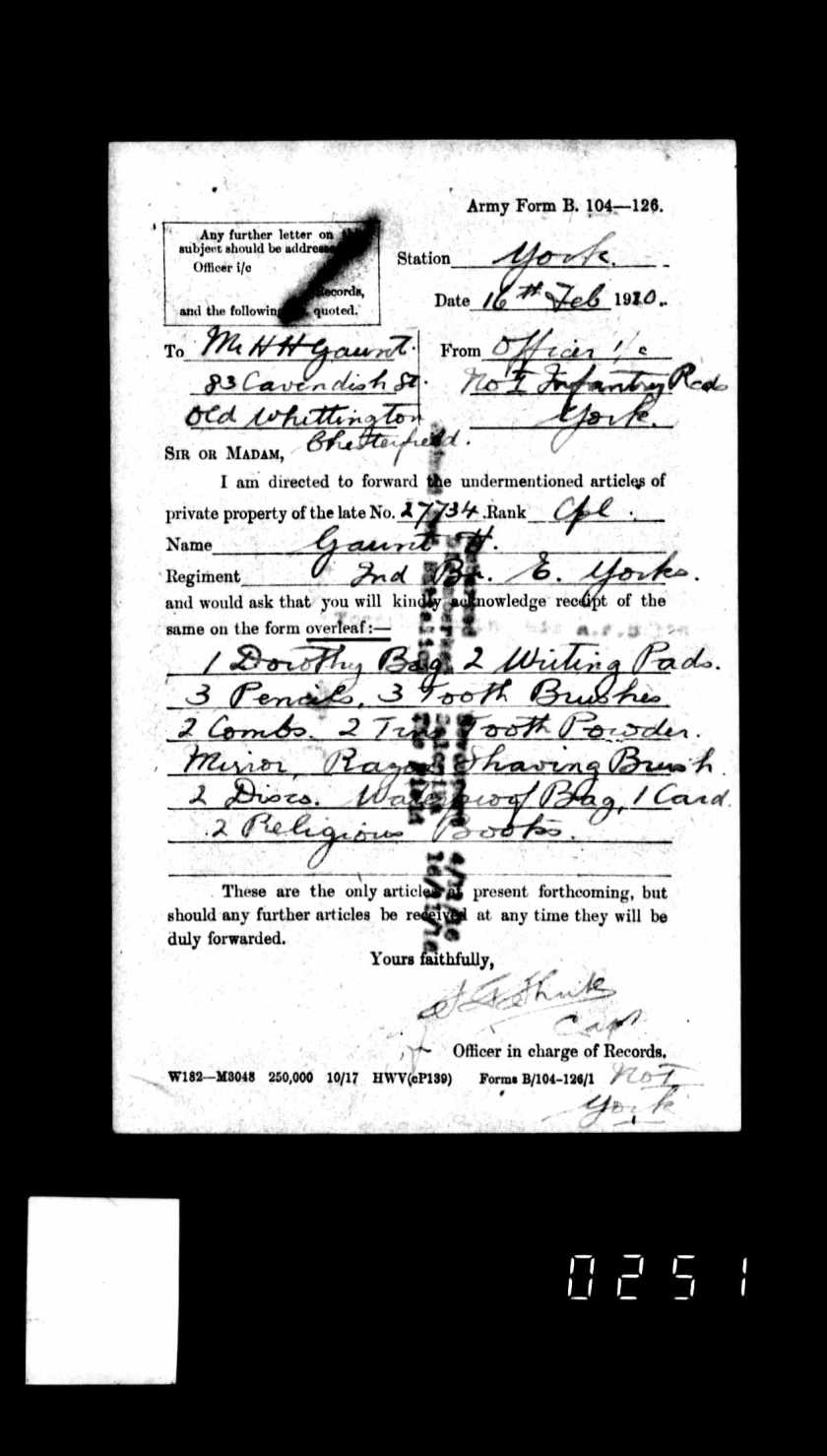 Herbert was awarded the British War and Victory Medals. 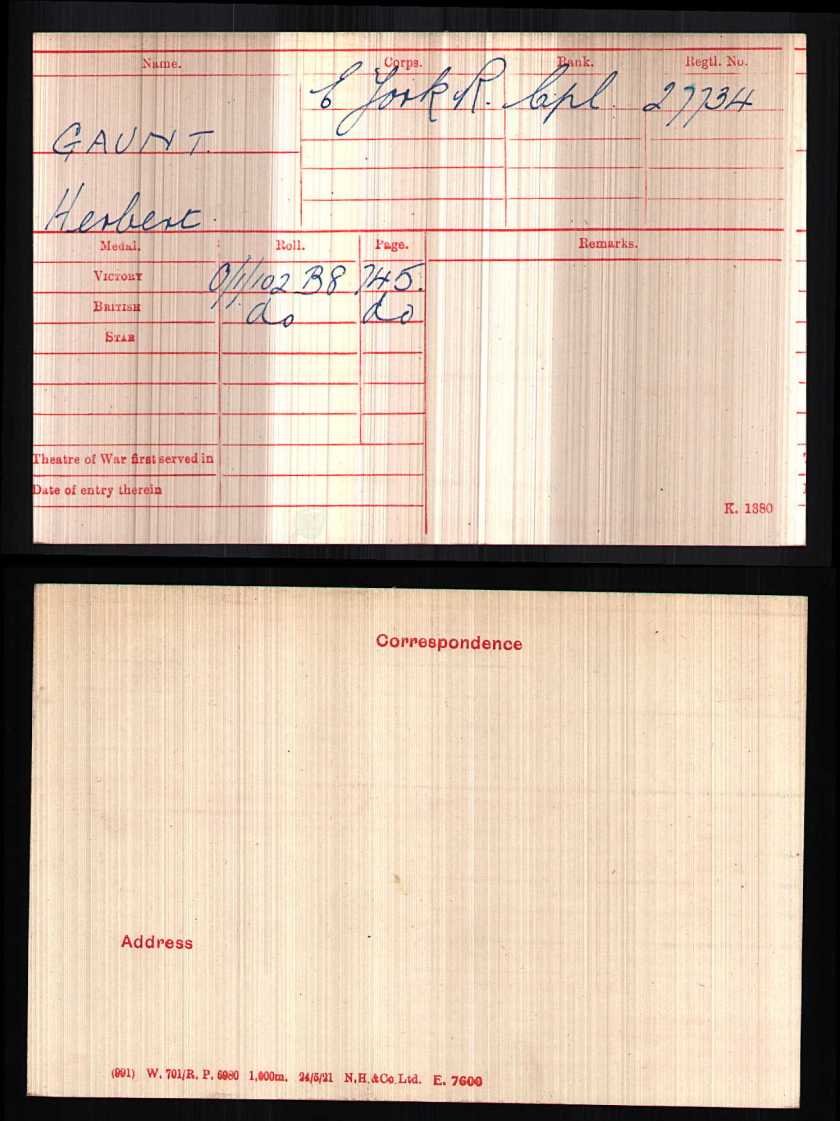 He is commemorated on Old Whittington and the Brushes War Memorials, and as Herbert spent most of his life in Kilburn he is also remembered on Kilburn War Memorial. 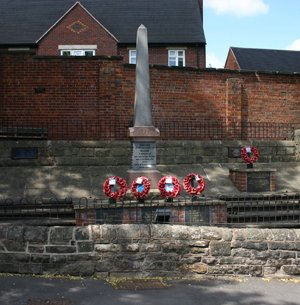 Herbert had two brothers who also went away to War. Sadly William died on 28th September 1917 and is commemorated on the Tyne Cot Memorial, he was 19 years old.

Herberts mother Martha died in 1920, Herbert Senior remarried in 1921 and on the 1939 register he was still living at 1 Cavendish Street with his wife Elizabeth, he died in 1952. 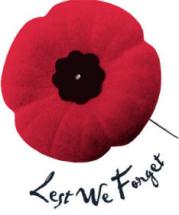