John Thomas Bunting was born early in 1893.  He was the second eldest son after Samuel James.

John was baptised at Newbold-cum-Dunston on 13th March 1893.  His parents were Robert and Sarah Jane, the address on the Baptism register was given as Sheepbridge Square.

The 1901 census shows that the family lived at No 9 Cavendish Square at Sheepbridge.

At this time there were six children in total, four boys and four girls.

Unfortunately I have been unable to find any further information about John until the 1911 census.

The family appear to have moved and in 1911 live at No 7 Cavendish Square and there are now 10 children living at home, but as you can see from the above record there were 12 children born, two having died.

John is now 18 years old and working as a Pony Driver in the pit.  Usually the Pony driver was the first job that the lads would do down the pit before they went on to the heavier work. Johns brother, Robert, was also a Pit Pony driver according to the census.

John enlisted in Chesterfield originally into the Notts and Derbys Regiment and his Service Number was 23386.  However, at some point he was transferred to the 1st Battalion Lancashire Fusiliers and given a new Service Number 24085.

I cannot trace a record of why this might have happened, John’s records along with many others were destroyed in 1940 when a German bombing raid struck the War Office repository in Arnside Street, London.

Normally the reason for transfer to other Battalions was to swell their numbers if there had been heavy losses.

According to Johns medal record he was sent abroad to fight in August  1915, after re-checking my research John would have first served at Gallipoli (2B on his medal card refers to the Theatre of War he was first sent to as being Gallipoli). More information on the Lancashire Fusiliers in Gallipoli can be found here

The Battalion were then sent to France and arrived there from Egypt on 20th March 1916.

Sadly the medal card doesn’t give any clues to the date when John enlisted or when he transferred from Notts and Derbys Regiment to Lancashire Fusiliers, the medal cards only cover the period of entitlement, which started as soon as  they hit the shore of a theatre of war.

After reading the war diaries for June 1916 for the 1st Battalion Lancashire Fusiliers, it is possible that John sustained his injuries at Louvencourt (which is in the Somme Department of France) during 10/11th June when  the battalion came under heavy shelling and they reported 20 killed and 36 wounded. I have no evidence to support this theory but John is buried in Louvencourt Military Cemetery.  Information on Louvencourt Cemetery can be found here

The grave registration  from Commonwealth War Graves Commission is below:-

Further information on Louvencourt cemetery can be found here 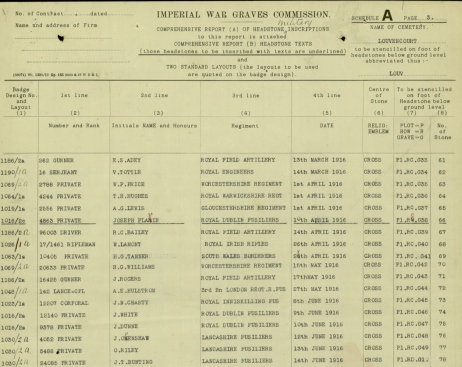 The Grave report above (John is the last entry) shows what would be on the headstone for John and it confirms that a Cross was erected.

He was awarded the Victory Medal, the British War Medal and the 14/15 Star. 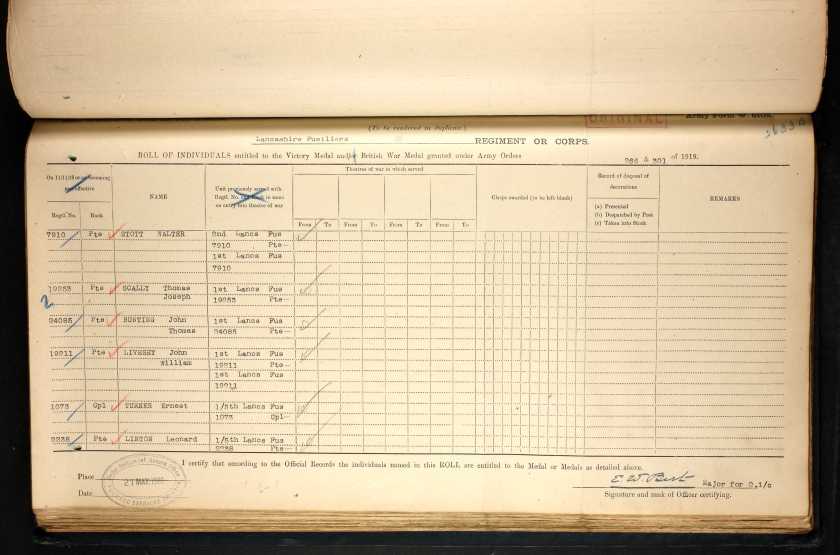 John is remembered on Old Whittington and The Brushes War Memorial.

Sadly on the 1st July 1916 his younger brother Robert was killed in action. 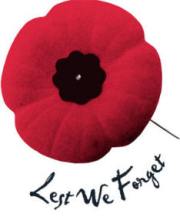