Ernest was the seventh child for Herbert and Emily (Bacon) Gilberthorpe. When Ernest was born on 1st March 1895 at Whittington his parents, were living at Victoria Street, Whittington.

He was baptised on 18th September 1895 at Old Whittington church.

Ernest’s baptism record, showing his date of birth in the right hand column.

1901 and the family were still living at 10 Victoria St, and Ernest now had two younger siblings, Robert and Gertrude.

On the census the address is shown as Victoria Road, the map of Broomhill Park for 1919 distinctly shows Victoria Street, perhaps the enumerator made an error. The baptism record has the address entered as Victoria St. and I would imagine it is far more likely that the parish priest would know the correct address! Herbert Gilberthorpe is listed as a joiner and he works for himself.

There is no on-line school record for Ernest however, his younger brother Robert attended Websters Endowed School on Church St (now Mary Swanwick) and there is a good probability that Ernest went there too!

By 1911 the family had moved to New Whittington and were living at 60 Handley road. Ernest is now 16 years old and has left school and is working for his father as a joiner. According to Kellys Trade Directory for 1912 Herbert Gilberthorpe had his joinery business at the Market Ground in New Whittington. The Market used to be at the top of South Street in New Whittington, the area behind what was then the Baptist Chapel.

There is an incident recorded in the Derbyshire Courier 20th August 1912, regarding Ernest Gilberthorpe.

It sounds like it was quite a nasty accident, with Ernest unconscious for some considerable time.

In 1913 Ernest’s mother, Emily, died and at some point Herbert, Ernest’s father moved to 64 Handley Road New Whittington. The next information for Ernest is when in he joined up in January 1915. Luckily much of Ernest’s Service record has survived however, there are a couple of anomalies.

He enlisted in Chesterfield and his service number was 65048, Ernest joined the Royal Engineers and his trade was given as carpenter. All information I might have expected, the problem is his age is given as 22 years and 9 months and his address as Sheepbridge Chesterfield. Ernest was born in March 1895 and would just have been short of 20 years of age when he enlisted, he quite possibly left the family home and lodged in Sheepbridge. It is definitely the correct Ernest, as all of the next of kin records will confirm later. Ernest was quite tall for the time standing at 5ft 10 ins.

As Ernest was a carpenter he would be invaluable to the Royal Engineers, who relied on skilled men, blacksmiths, bricklayers, masons along with carpenters and other trades, to build bridges, roads, maintain railways in fact carry out all the jobs necessary to keep the Army on the move.

Ernest was attached to 105th Field Company, and the Field Companies provided technical skill and know-how in support of the fighting units of the formation or Division, in Ernest’s case this was 25th Division.

By the time Ernest, who was a Sapper, arrived in France on 27th September 1915 each Infantry division included three Field Companies, each Field company consisted of 217 men:

The 25th division were involved in many actions on the Western Front, I cannot confirm definitely which Ernest took part in but he would certainly have participated in some of them.

In May 1916 the 25th was involved in the attack on Vimy Ridge. The war diary for 25th division confirms that around the 16th May the 105th Field Coy were positioned in the Zouaves valley, in particular the steep hillside of Talus des Zouaves. Ernest was wounded in the chest around the 18th of May. The medical report says he had a ‘contused chest wound’. The report also goes on to say that he had suffered fractured ribs. He was taken to 42nd Casualty Clearing Station, which during this time was at Aubigny. He recovered and was sent back to the front line just in time for the start of the Battle of the Somme!

On the 8th July 25th Division took over the front at La Boiselle, this was a phase of the Battle of Albert and more can be read here http://www.historyofwar.org/articles/battles_albert1916.html

The 25th division were also involved in the Battle of Bazentin (14-17 July 1916) and the Battle of Pozieres (23rd July – 3rd September 1916) both phases of the Battles of the Somme. Without doubt Ernest would have seen plenty of action during this time. Thankfully, he was awarded leave to the UK on 23rd January 1917 until 2nd February 1917, I would imagine he welcomed this time away from the front line and the fighting.

The 25th saw action in many of the major battles of 1917, in April 1917 Ernest was admitted to hospital once again, but no reason as to why has been entered. He re-joined his unit on 20th May. During July Ernest was promoted first in June to Lance Corporal and then in July to 2nd Corporal. 2nd corporal was a rank specific to the Royal Engineers and was a similar rank to a Bombardier in the Royal Artillery. Around 23rd December Ernest again went on leave to the UK until 4th January 1918. This would be the last time he would return to the UK.

In May 1918 25th Division journeyed to Fismes, 20 miles South East of Soissons in the Champagne region of France.

The front line on the Chemin des Dames and south of the Aisne had been very quiet since spring 1917 and it was thought that the tired Divisions would be able to rest and recover there. On 26 May, intelligence confirmed a heavy German attack could be expected. 25th Division was in reserve and ordered up into a closer support position.

The 25th Division were ordered to positions south of the river Aisne and north east of Fismes. At 1am on 27 May 1918, a heavy German bombardment with gas and high explosive hit the entire area between the front line beyond the Chemin and Fismes itself. By 10am, all three Brigades had come under orders of the 21st, 8th and 50th Divisions respectively, which by now were fighting for their lives north of the river. By mid-day the Germans had broken through and crossed the Aisne: the units of 25th Division were thrown into action. They were just about destroyed!

Casualties between 26 May and 14 June amounted to 4338 officers and men, of whom 2511 were missing. Ernest Gilberthorpe was one of these casualties, killed in action on 27th May 1918. Ernest’s body was never recovered and he is remembered on the Soissons Memorial (more details at https://www.cwgc.org/find-a-cemetery/cemetery/79400/soissons-memorial/ ).

An entry in the Derbyshire Courier 15th June 1918 confirms the sad news of Ernest’s death and also that he was younger than stated on his attestation form, he was only 23 years old when he died.

The family were obviously saddened by the news of Ernest’s death and tried to find out exactly what had happened to him. His younger brother Robert sent a letter to the Royal Engineers Record Office asking for information and this is the reply. 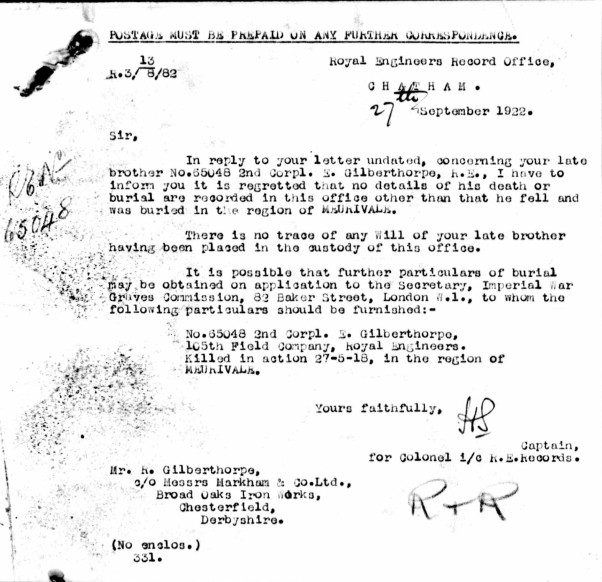 It must have been very distressing for families not to be given any information of their loved one’s death, or to have a grave to visit.

Ernest was awarded the 14/15 Star, British War and Victory Medals. 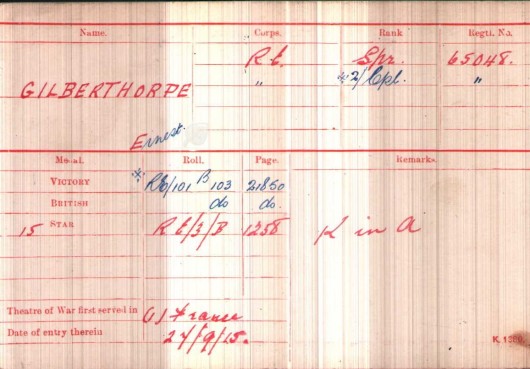 As Herbert was now a widower it was left to him to sign for Ernest’s medals.

Ernest is remembered on Old Whittington, the Brushes and New Whittington War Memorials.

Herbert was still working in 1925 and his entry in Kellys Directory lists him still at the Market Ground. Below him is an entry for his son Joseph, also a joiner.