When I started researching Vincent’s story I came into contact by email with a descendant of Vincents.  In fact Vincent’s Great Nephew, the grandson of his brother Septimus, Chris Cooke.  Chris has already done a deal of research and has kindly given permission for his family information to be shared on the website and below is Chris’s research into Vincent’s life.

Vincent was born on 19 August 1892 in Sheepbridge, Chesterfield, Derbyshire. He was the fourth child of Herbert Frederick (a coal miner) and Ruth Cooke. He almost certainly attended the Brushes School at Sheepbridge.

Prior to enlisting in the army very shortly after the start of the war, Vincent was an Iron Insulator/Malleable Iron Moulder working at Sheepbridge Works. He was the first of his brothers to enlist – his older brothers Herbert William and Septimus both later joined the army and thankfully survived the war.

Shortly after enlistment, it appears Vincent was based at a training camp near Wareham in Dorset. He wrote a letter to his mother which is postmarked 12 Sep 1914. The letter was written on a shirt cuff and was sent as a Wool Postcard. In the letter, he mentions the shortage of paper and postage stamps, and how they had to rip off their cuffs and collars to write letters home. He also mentions that ‘you did not send me that cake as I asked you to send but I expect you will sometime.’ He signed the letter ‘your loving son Vincent xxxxxxx’

Vincent’s first entry to a theatre of war was in France on 30 August 1915. He presumably had a period of leave just prior to that, as he married Elizabeth Hall at Whittington Parish Church on 7 August 1915. Witnesses at the wedding were Oscar Cooke, Gertrude May Cooke, James Thomas Hall and Lily Glynn.

Vincent’s only child – Lionel Vincent – was born on 9 February 1916 in Dronfield, Derbyshire, but sadly died of ‘convulsions’ on 14 March 1916. It is very likely that Vincent never saw his son. The burden of grief and despair felt by Elizabeth – who lost both her son and her husband within just a few months of each other – is hard to imagine.

The official war diaries of the 12th Battalion show that the battalion were moved to the Somme battlefield area in late July/early August 1916. They were engaged digging new trenches and clearing the dugouts and old trenches of what had been the German front line.

On 13 August 1916, D Company ‘continued work on Derby Lane in Bernafay Wood and completed the trench through the wood to an average depth of 5’-10” traversed all the way and connecting with the communication trench between Trones and Bernafay Woods’. Later in the evening, ‘40 men of B Company and 50 from D Company went out to commence Sherwood Trench’ but ‘one party were badly caught in enemy barrage of fire’. Six ‘other ranks’ of D Company were killed. According to ‘Soldiers Died in the Great War’, they were:

Vincent is probably buried in one of the graves between (or adjacent to) grave 8 and grave 12 in Row D in Flatiron Copse (these graves are of unidentified soldiers).

Vincent was promoted to Lance Corporal just a few days before his death. He was awarded the Victory Medal, the British War Medal and the 1915 Star.

The report of Vincent’s death appeared in the Courier Saturday 26th August 1916. 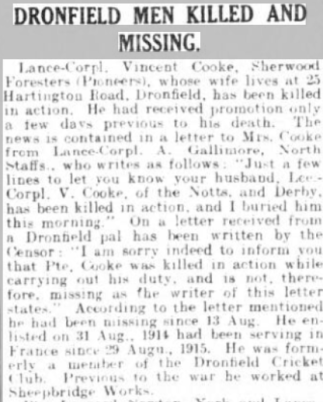 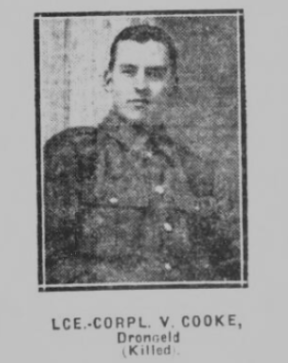 Chris has given permission for me to use the family copy of the photo.

There is not much I can add to Vincent’s story the family research is very thorough.

Vincent was baptised on 11th September 1892 at Old Whittington Church.

He attended Websters Mixed School, probably the one on Church Street Old Whittington.  He was admitted 13th February 1899 and at the time the family lived at 101 Sheffield Road. He had previously been at the Brushes School and on 2nd January 1900 he was transferred, unfortunately the record doesn’t state where to!

In 1911 Vincent was living at 426 Sheffield Road Sheepbridge as the census shows and the number of children born to the marriage was 14 but again as in many cases three children had died. Luckily Vincent’s mother wasn’t aware that before much longer she would lose another!

On 7th August 1915 Vincent married, as Chris mentions, a girl from Dronfield called Elizabeth Hall and Vincent’s occupation at that time was a soldier.

Chris mentions in his research that his great uncle had to use his shirt cuff to write a letter to his mother, I am grateful to Chris for letting me have a photograph of this to share on the website.  I was very surprised to hear that this was the situation the men found themselves in.

The unusual envelope that the letter was sent in confirms that his mother was still living at 426 Sheffield Road in 1914.

Vincents medal card confirms his entry into France was on 30th August 1915 and the medals he received.

Vincent is remembered on the memorial at Thiepval, as Chris already mentioned his body was never officially recovered.

However, the family have done extensive research and feel that Vincent is most likely buried at Flatiron Copse. Information on Thiepval and Flatiron Copse can be found here