Thomas (actual name John Thomas) was a miner and the family were living at 6 Lowes Row Old Whittington. 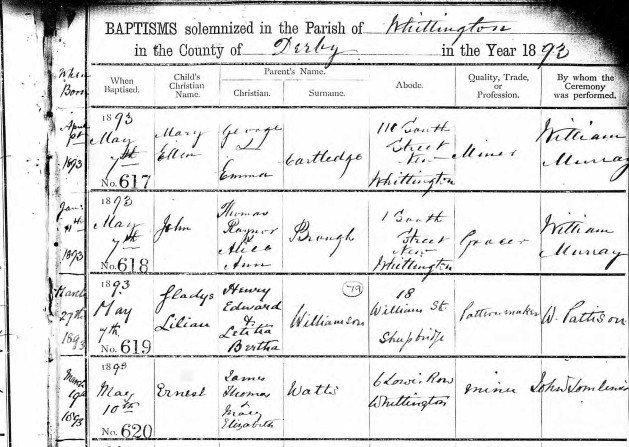 Ernest attended Whittington Websters Endowed Mixed school on Church Street. He started school on 23rd March 1896 when he would have been three years old. 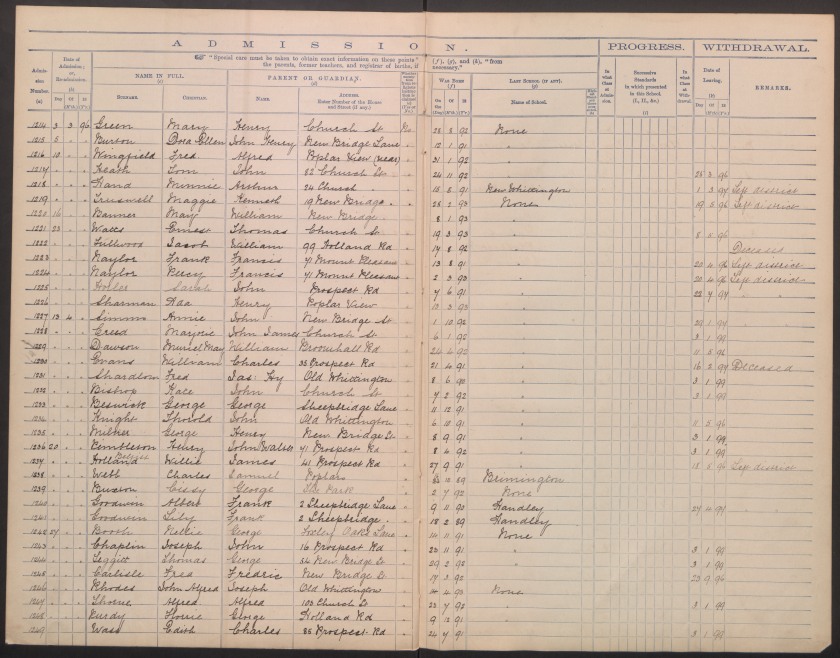 The 1901 census shows the family were living at 63 Church Street Old Whittington and it shows Ernest attending school.  The census also shows that prior to moving to Whittington the Watts family moved around frequently, with Ernest’s older siblings being born at Southwell, Eckington and Barlborough.

The next record for Ernest Watts is the 1911 census after Ernest has started work as a colliery labourer, above ground.  Ernest was 18 years old in 1911 and the family were living at Springwell, Middle Handley. 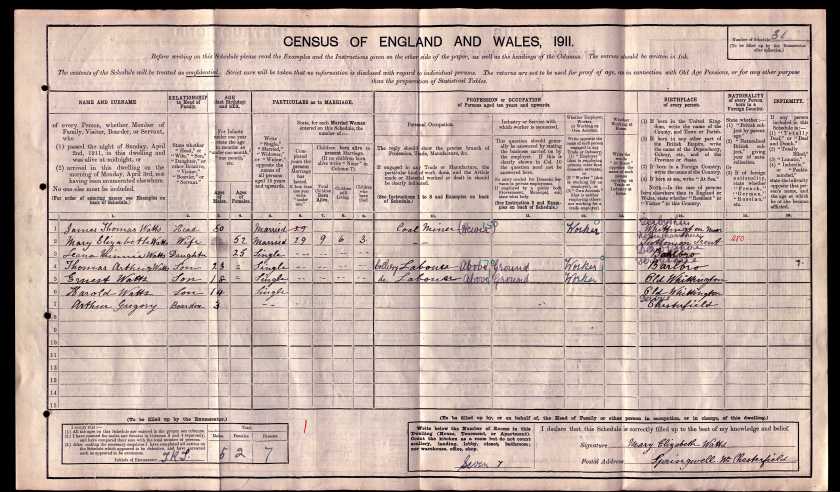 Ernest Watts joined the 2nd Notts and Derbyshire regiment, the Sherwoods.  From his service number and the date of embarkation he may have joined before the beginning of WW1, but as with many his service records were destroyed during WW2.  Ernest’s Service number was 12086 and he left for France on 8th September 1914 and would have  landed at St Nazaire on 11th September 1914 as part of 18th Brigade in 6th Division.

Ernest would have been fighting in the North of France around the Ypres Salient. The Divisional war diary reports that 6th Division encountered quite heavy opposition from the Germans during the end of June early July 1915 and he would have spent quite some time in a front line trench.  It was during the fighting in the Ypres Salient that the German Army first used chlorine gas as a weapon.  At the end of June early July 6th Division were situated  between the Roulers to Ypres railway line, the canal, Wieltje and Potijze just north of Ypres. 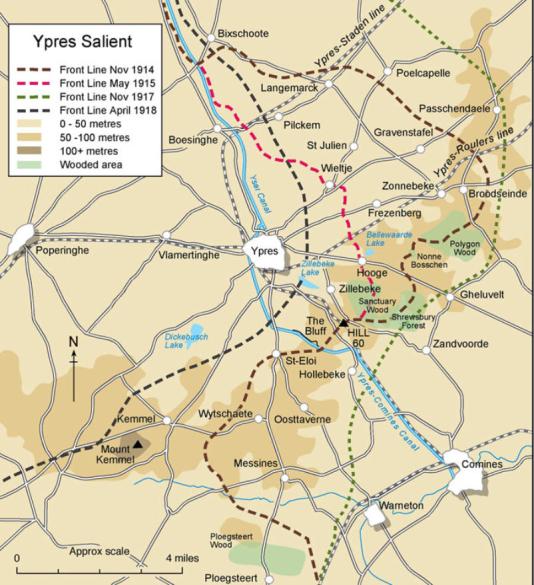 Ernest was injured sometime in June/July 1915 and was sent home to the Norfolk War Hospital at Thorpe St Andrew.

When a soldier was injured speed was important and he would first have been tended to at the Regimental Aid Post which was 200-300 yards behind the front line.  A little further back would be the Advanced Dressing Station and  Ernest would have been taken there by stretcher. Next it would be Field Ambulance to the Casualty Clearing Station these were situated a few miles behind the front line and normally near to a railway line so that the injured could be evacuated easily.  The Casualty clearing stations were moved around quite often depending where fighting was taking place.  Without an idea of when he was injured its difficult to pinpoint which Station Ernest was taken to.  Next he would have travelled probably by Ambulance Train to a base hospital which would be near or at one of the channel ports. He would then have been taken back to England by ship and then by train to the War Hospital.  Quite a gruelling journey! 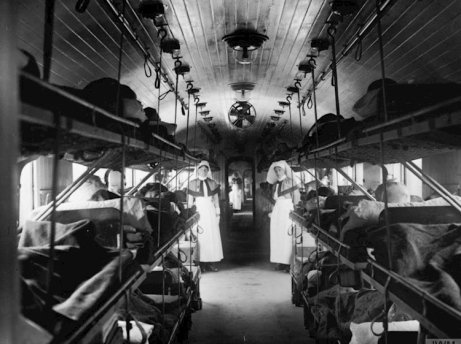 Interior of an Ambulance Train (picture courtesy of the History Press)

Ernest  died of his wounds on 29th July 1915 at the Norfolk War Hospital, he was

22 years old. His body was brought back to Whittington and he is buried in Old Whittington churchyard.

There is a report in the Derbyshire Times dated August 7 1915, about Ernest.

“The internment took place on Sunday of Pte. Ernest Watts, of the Notts and Derbys Regiment, who died from wounds in the hospital at Norwich last week. Watts was only 22 years of age, and had twice been wounded, his last injuries being to the head.  He resided at Springwell, near New Whittington, and a small detachment of the Notts and Derbys from Chesterfield attended the funeral, which took place at Old Whittington. The remains, covered by the Union Jack, were wheeled on a bier to the churchyard. The Rev. H. Russell conducted the service, and at the close a volley was fired over the dead soldiers grave”.

(Picture of a bier taken from Wikipedia)

The grave registration for Old Whittington churchyard taken from  http://www.cwgc.org/

As his medal card shows Ernest was awarded the Victory and British war Medals.  He would have qualified for either the 1914 Star or 14/15 Star Medals, but this information has not been recorded on his medal card.

This bronze medal award was authorized by King George V in April 1917 for those who had served in France or Belgium between 5th August 1914 to midnight on 22nd November 1914 inclusive.

This bronze medal was authorized in 1918. It is very similar to the 1914 Star but it was issued to a much wider range of recipients. Broadly speaking it was awarded to all who served in any theatre of war against Germany between 5th August 1914 and 31st December 1915, except those eligible for the 1914 Star.

Like the 1914 Star, the 1914-15 Star was not awarded alone. The recipient had to have received the British War Medal and the Victory Medal, which Ernest had.

An estimated 2.4 million of these medals were issued!

Ernest Watts is commemorated on Old Whittington  and the Brushes War Memorials. 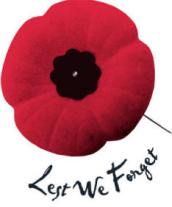