William Leslie Gaunt was born on 7th March 1898 in Old Whittington.  His parents were Henry and Martha Ann Gaunt. He was baptised on April 20th 1898. 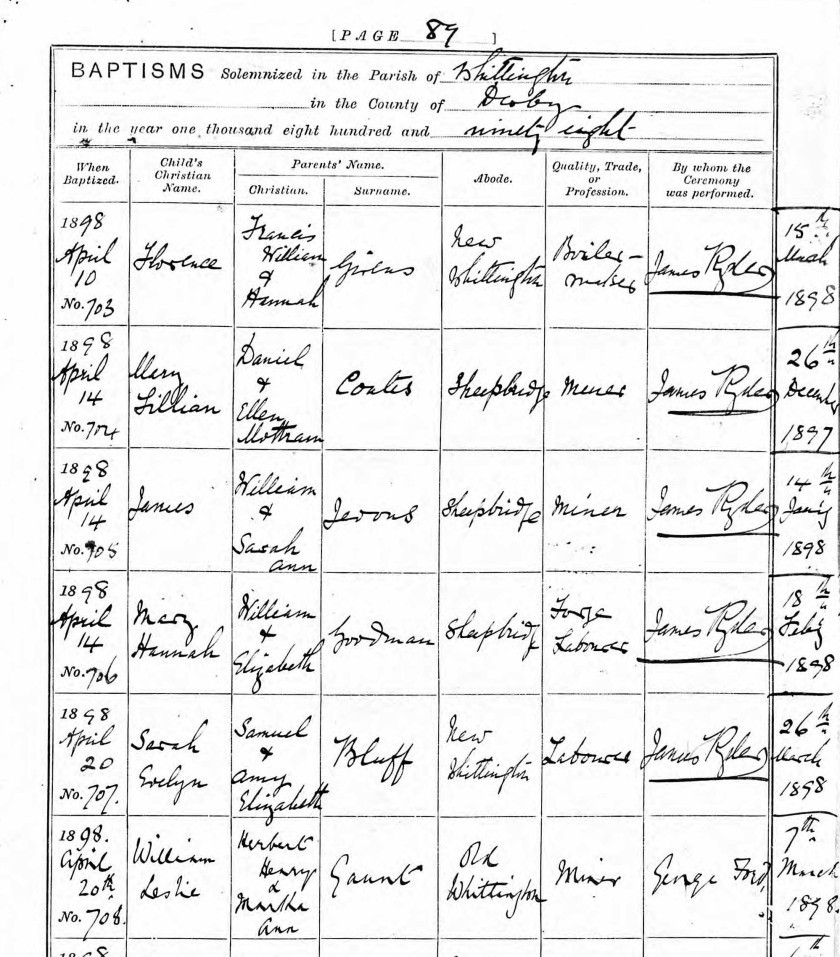 According to the 1901 census the family were living at 83 Prospect Road Old Whittington and William was the second of four children in the Gaunt household. Henry was a miner and had been born in Kilburn, his wife Martha is also listed as born in Derby.  The family must have moved to Whittington sometime between 1896 and early 1898 as John the eldest child listed was also born in Derby whilst William was born in Old Whittington.

The census is slightly mis leading as John was not the eldest child. There was another son Herbert who had been born in Horsley Derbyshire and who was living with his paternal grandparents in Horsley at the time of the 1901 census.  This makes William the third child not the second as I previously stated.

I am not sure why Herbert was left with his grandparents, but Martha had five children under six years of age which would be quite a handful and had moved away from her family.  It was not unusual at this time for children to be sent to other family members to be brought up.

I cannot find any school records online for William and the next information I can find is the 1911 census.

The family are now living at 83 Cavendish Street which is just off Prospect Road, and this area was classed as Broomhill Park.

William is 13 years old but there is no indication whether he is still at school or not.  Sadly, I cannot report what Williams occupation was before he joined up, but as his father and his older brother were coal miners there is a good possibility William could have gone down the same employment route.

As you can see from the census document oldest brother Herbert is still not living with his parents, but on this census is confirmation that Henry and Martha had six children all still living.

In August 1914 William enlisted and joined the 9th Battalion Notts and Derbyshire Regiment (Sherwood Foresters) service number 13577, however this was changed to 19833 later.  He was only 16 years old when he joined!  Williams job in the army was as a signaller. This is a description of a signallers job in WW1.

During the First World War being a signaller usually meant you were close to the frontline troops, providing signals communications back to your Company and Battalion H.Q.  Wired telephones were used where possible but this involved laying landlines which was a hazardous job due to enemy shelling.

His medal card records that he was sent to the Balkans and arrived there prior to 31.12.1915. If this is the case, then he would have been 17 years old when he was sent overseas! According to the official government policy at the time you had to be 18 years old to sign up and 19 years to serve overseas.  Not everyone had a copy of their birth certificate in the early 1900’s and it would be quite easy to lie about your age without anyone following it up.

The movements of the 9th Battalion were as follows:

Formed at Derby in August 1914 as part of K1 and came under orders of 33rd Brigade in 11th (Northern) Division. Moved initially to Grantham. Moved to Frenchman in April 1915.
Sailed from Liverpool in early July 1915 for Gallipoli, landing at Suvla Bay 7 August 1915.
Evacuated from Gallipoli December 1915, moved to Egypt via Imbros.
Moved to France in July 1916  (Excerpt taken from https://www.longlongtrail.co.uk/army/regiments-and-corps/the-british-infantry-regiments-of-1914-1918/sherwood-foresters-nottinghamshire-derbyshire-regiment/)

Transcript of a report in the Sheffield Daily Telegraph 16th October 1915 under Chesterfield Casualties:

Struck over the right eye by fragment of shrapnel, an Old Whittington soldier, Private William Leslie Gaunt, 3rd Sherwood Foresters, is in hospital in Cairo.

The account states that William is serving with the 3rd Battalion however I cannot find where the 3rd served in the Balkans, perhaps it is just an error.

William returned to the fight and this was probably when he was given a new Service number and sent back to a different battalion. All the records seem to indicate that he was serving with 2/6th before his death, they didn’t arrive in France until February 1917, at some point he changes battalions. There is a chance he was sent home to recover from his wounds but this is only supposition, I have no evidence to support it.

The Battle of the Menin Road Ridge (23-25 September)

20 September 1917, the Division’s role was to relieve the 55th (West Lancashire) Division after it had made an attack in the area of Gravenstafel. The Lancashires succeeded in capturing all objectives and the 59th duly moved to relieve them. Assembling around Goldfish Chateau, just outside Ypres, the Division moved up into the salient on the night of 23/24 September and completed the move into battle positions during 25 and 26th. Divisional HQ was set up in a pillbox on the eastern bank of the Ypres Canal.

The Battle of Polygon Wood (26-30 September)

The Division attacked as part of the British force that made an assault early on 26 September. Using 177th and 178th Brigades in front, the Division captured all of its objectives and then held on against German counter attack. Divisional HQ, finding its canal position to be very near some heavy artillery, moved back a way to Mersey Camp Wood but were there bombed by enemy aircraft at night. The Division had suffered 2000 casualties while in the salient and was relieved on 29 September by the New Zealand Division.

These two battles were both phases of the Third Battle of Ypres. (Also known as the Battle of Passchendaele.

William died on 28th September 1917 and is commemorated on the Tyne Cot Memorial, he was 19 years old.

Tyne Cot Cemetery stands near to the town of Ypres and I think that would almost confirm that William died during the Battle of Passchendaele. More information on Tyne Cot Cemetery can be found here https://www.cwgc.org/find/find-cemeteries-and-memorials/85900/tyne-cot-memorial.

As you can see from the grave registration entry, Williams parents are now living at No 1 Cavendish Street old Whittington. 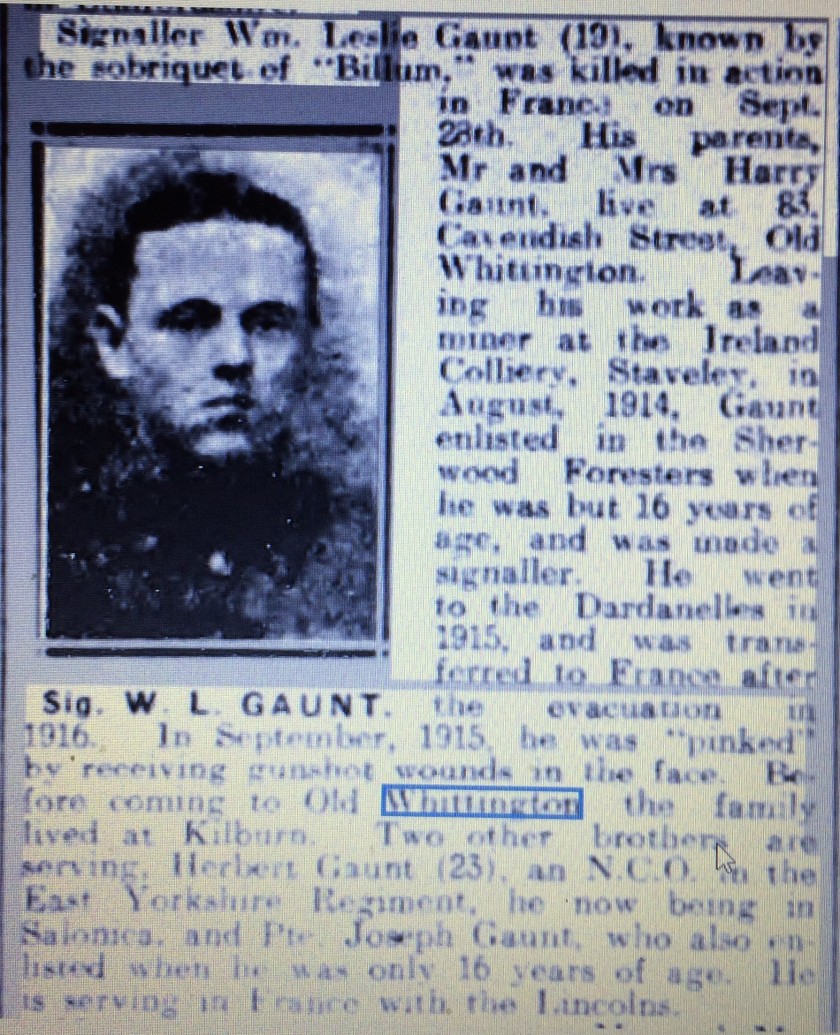 William is commemorated on one of the panels that can be seen below.

William was awarded the British War and Victory Medals and the 14/15 Star.  The 14/15 Star was awarded to men who served in a Theatre of War between 5th August 1914 and 31st December 1915.  William went overseas before his 19th birthday!

William is remembered on Old Whittington and the Brushes War Memorials and on the Sherwood Foresters Roll of Honour here http://www.the-sherwood-foresters.co.uk/g_names/gaunt_william_leslie.html

Williams brother Herbert died of his wounds 1st January 1919 and he is buried in Horsley churchyard.  This must have been a terrible double blow for Martha, their mother.

Williams mother Martha died in 1920, Herbert remarried in 1921 and on the 1939 register he was still living at 1 Cavendish Street with his wife Elizabeth, he died in 1952.