George William Bonson was born 27th March 1897,  he was the first child for John William and Jane Bonson.  The family lived at Station Road at Whittington. 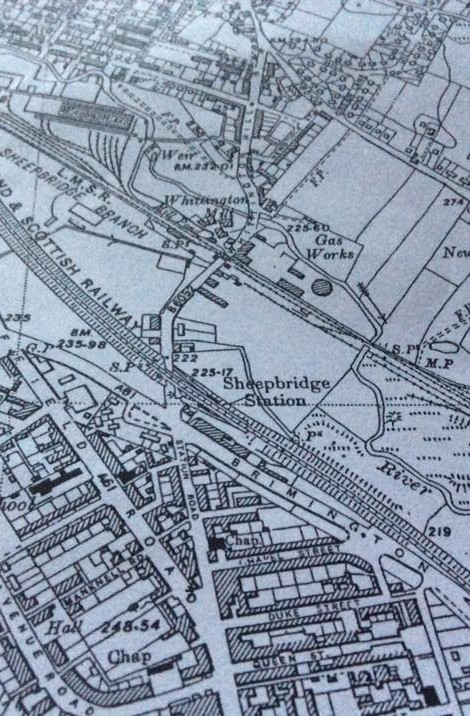 Station Road ran from the river bridge at the bottom of Whittington Hill across Brimington Road North and up to the junction with Sheffield Road (where the old Black Horse used to be).

George was baptised at Newbold church on September 26th 1897. 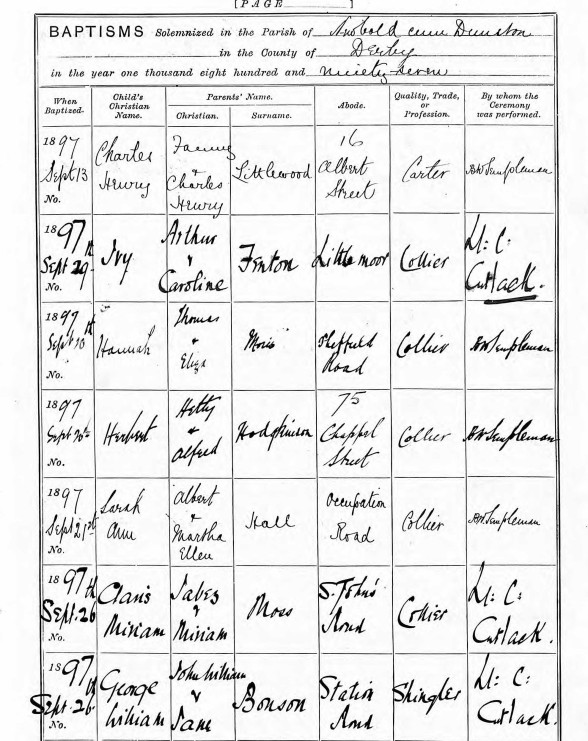 George’s father’s occupation is given as Shingler.

“A shingler  grasps one or more balls of wrought iron in a pair of tongs and holds it under a steam hammer or a drop hammer, turning it over continually until as much slag as possible is squeezed out and the ball is shaped into rough bloom or bar ready for rolling”.

John worked at the Ironworks, presumably at Sheepbridge Ironworks.

The 1911 census shows that George was still at school and he now had three younger brothers, Wilfred, Samuel and Jonas. The family were still living at Station Road and the census information  confirms  that John Bonson does in fact work at Sheepbridge Works. 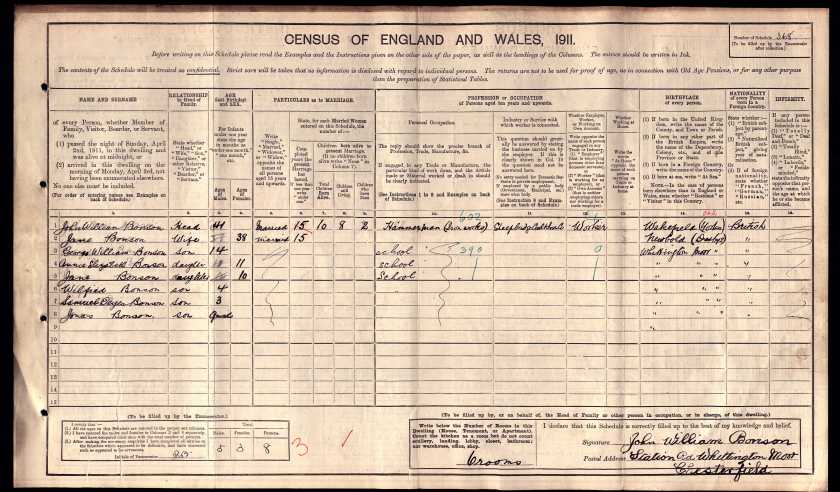 There are no records to confirm where George worked when he first left school but, according to a report in the Derbyshire Times, in November 1915 when he was only 17 years of age he enlisted as a Private in the 9th Battalion Notts and Derbyshire Regiment, Service Number 18822. (Either the D Times have got the date and  year he enlisted wrong or his age, as George was born in March 1897 it would have made him 18 if he enlisted in November 1915). As with many there are no Service records for George, they would have been destroyed during the 1940 blitz on London.

The 9th Notts and Derbyshire came under orders of 33rd Brigade in 11th Northern Division and were sent to Gallipoli in early July 1915, landing at Sulva Bay on the 7th August.

More information on the Dardanelles campaign can be found at

According to the Derbyshire Times  report at the time of George’s death he was sent first to the Dardanelles, where he was wounded.  The 9th Battalion were evacuated from Gallipoli in December 1915, which would seem to indicate that George must have been wounded not long after he arrived there!

How long George’s recovery or what the injury was is unknown, but after he had recovered he was  sent to France. I think this must have been when he was transferred to the 8th Battalion North Staffordshire Regiment Service Number 40792.  Sometimes soldiers were transferred because they had received special training or it could purely be to make up the numbers where there had been heavy losses.

He returned to the front in October 1916 (approximately) and at some point he was promoted to Lance Corporal. George was killed on 9th February 1917 near to Courcelles – au – Bois in the Somme Department, he was 19 years old.

The War Diary shows that the Battalion were busy with training in early February, and moved into the Trenches on February 7th. The situation was reported as normal in the days leading up to George’s death.  It was frosty and cold and the men were unable to dig as the ground was too hard.  On the 8th February between 7.30 and 9pm the front line was heavily bombarded.  On the 9th the report in the diary states that the situation was quiet during the day but again heavily bombarded at night.  5 men were killed and 13 wounded, I assume that George was one of the men killed.

In the report in the Derbyshire Times February 24th 1917 there were tributes from his Commanding Officer and one of George’s comrades.

‘He was unhappily killed by a shell which also killed three others.  He is buried near where he fell and a cross with his name and number have been erected over the grave. He will be greatly missed as he was very popular with everyone in the Company.  He a short while back received his stripe and was making a very promising N.C.O.’

‘He was killed on the 9th February. He was well liked by everyone for he was always willing to do everybody a good turn. He was fearless in danger and a brave soldier’.

These two glowing tributes make it difficult to remember George was only 19 years old when he died!

Mr and Mrs Bonson had an inscription put on the grave:

‘Where the weary rest in peace bring us Holy Jesu’

George was awarded the Victory and British War medals along with the 14/15 Star.

His medal card shows his two different regiments and regimental numbers. The 2B refers to Gallipoli which was the first Theatre of war that George served in.

George is remembered on Old Whittington and the Brushes War Memorials.

As far as I can check without purchasing death certificates, I think George’s father John died in Chesterfield in 1946 aged 76 years old, and his mother Jane died in 1951 aged 78 years. 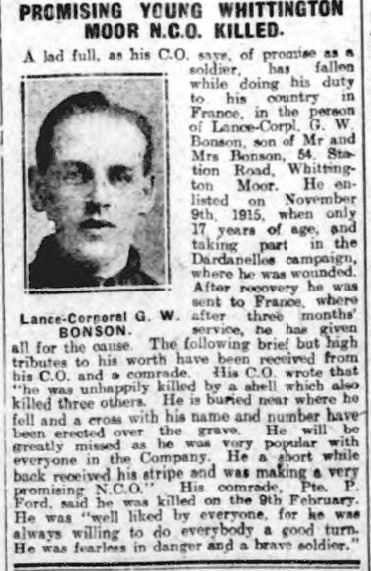