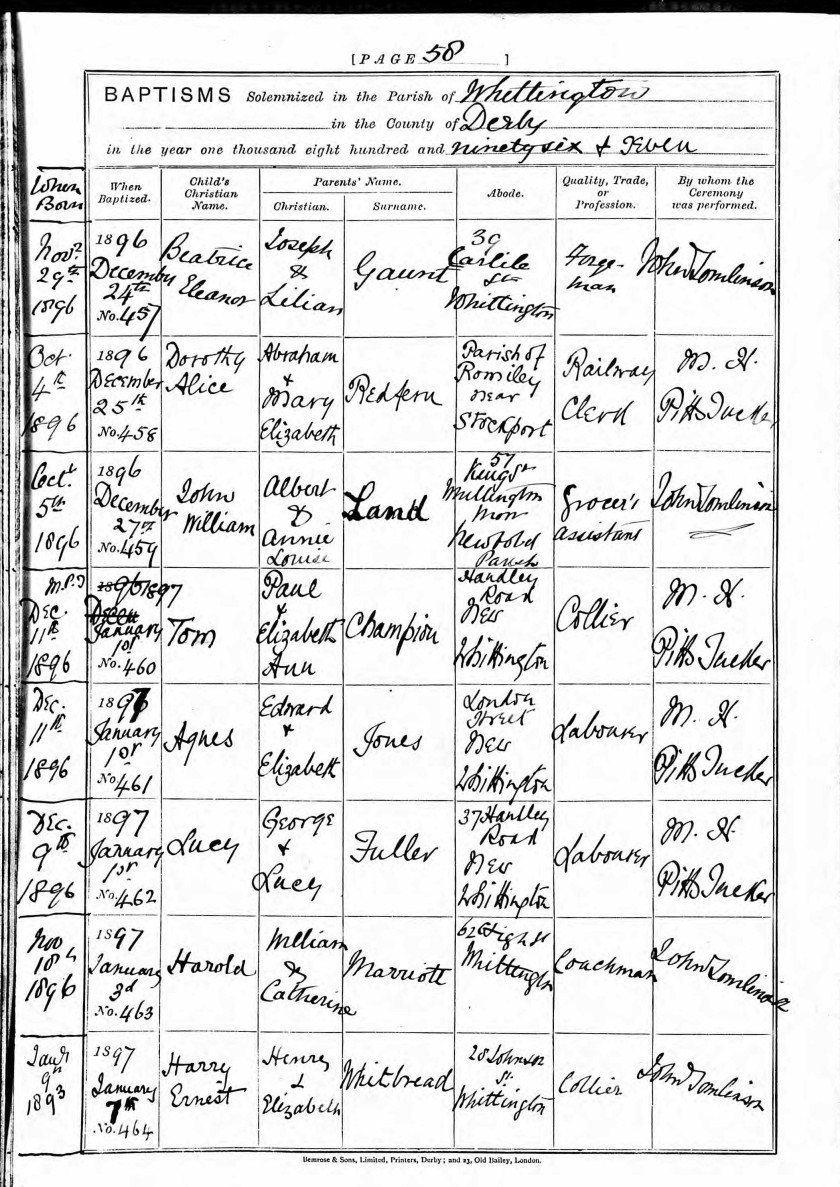 According to the Baptism Register Harry’s parents were Henry and Elizabeth Whitbread and the family home was at  Johnson Street Whittington. 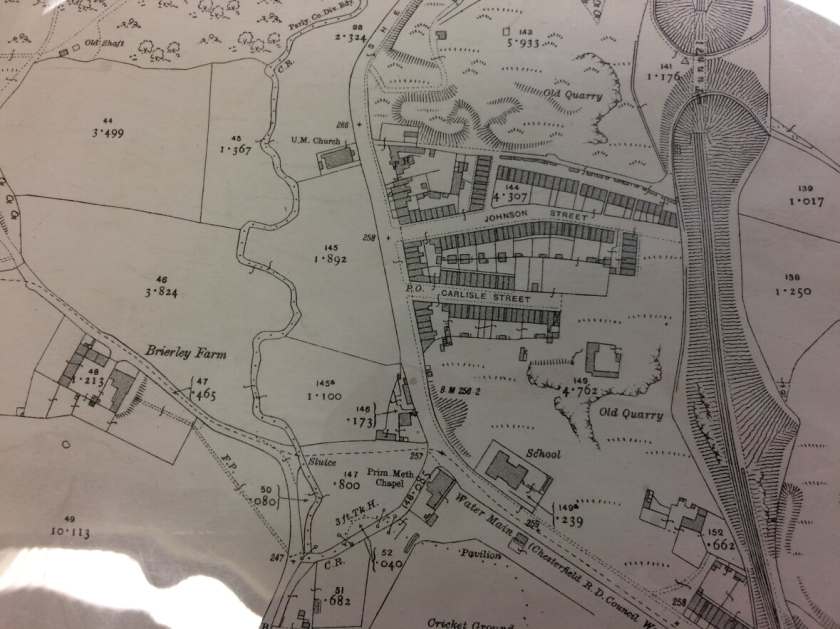 Harry appears to prefer to be called by his second name Ernest from now on I will refer to him as Ernest.

In 1901 the family were living at 26 Johnson Street with Ernest the only child still at home.

According to a newspaper report on the occasion of Mr Whitbread senior’s 80th Birthday, the couple had ten children in total.

1911 the family are still living at Sheepbridge and Mr Whitbread senior at 62 is still working as a coal miner. Older brother Joseph is also working as a miner and Ernest at 18 is unemployed.

At some point Ernest moved to Bedford, and in 1914 he married Millicent J Hartup in Bedford.

Ernest joined the Welsh Regiment, the recorded details show that he was born in Chesterfield but enlisted in Bedford, Service no. 47708.  There is no record of his enlistment date but he wasn’t awarded the 14/15 Star Medal which would indicate that he did not serve in a Theatre of War until after December 31st 1915. 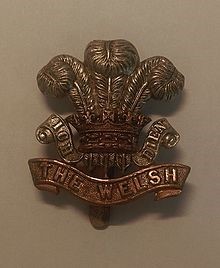 The Battle of Verdun took place from February to December 1916 and I can’t find any evidence that Ernest would have fought there, it was a Battle between the Germans and the French in the main.  The  Battle of the Somme was undertaken partly to take some of the German troops away from what was turning into a catastrophic loss for the French.  The Battle of Verdun was the longest Battle of WW1 and cost in human life  over 714,000 French and German men.

More can be read about Verdun  at

Without the date of Ernest’s arrival in France it is difficult to be sure what actions he was involved in  with the 2nd Welsh, however it is confirmed that he died on 3rd September 1918, he was 25 years old.

The War Diaries of the 2nd Welsh for the beginning of September outline what would have been Ernest’s last few days. 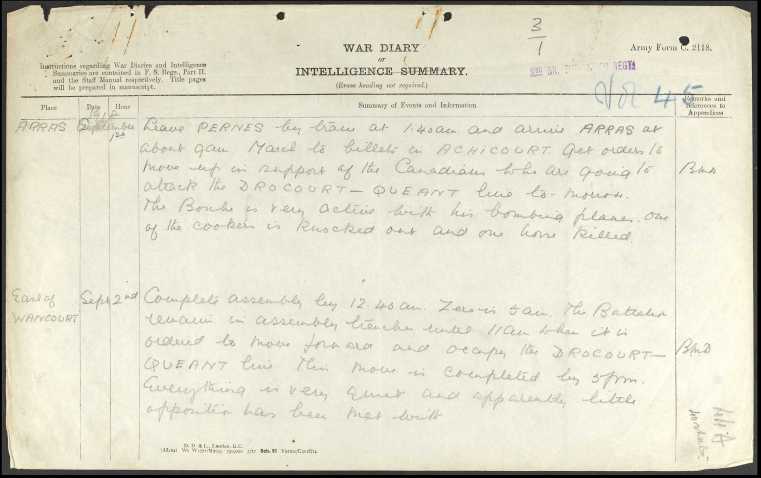 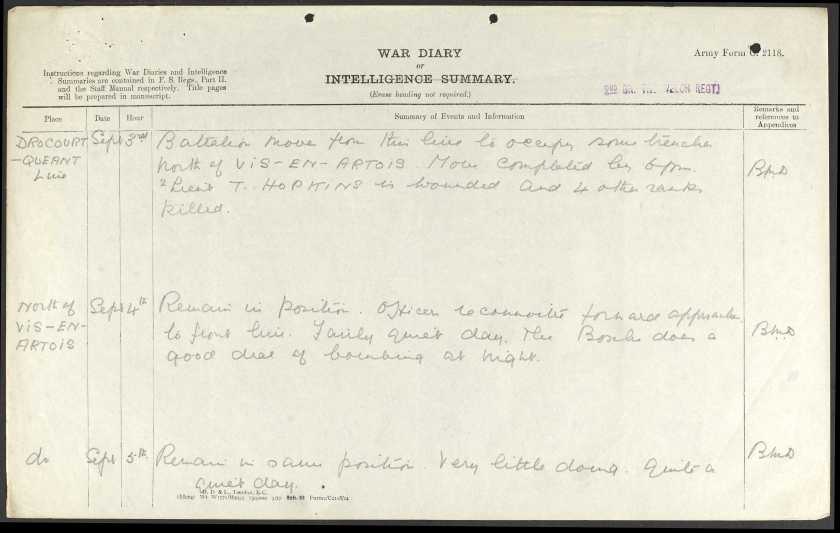 More can be read about the Battle at   https://en.wikipedia.org/wiki/Battle_of_Drocourt-Quéant_Line

The day Ernest died, September 3rd 1918, there were 4 other ranks killed, I assume Ernest was one of them.

Ernest died and was buried on the battle field and his body recovered later.  He was reburied at  Dury Crucifix Cemetery.  More information can be found here 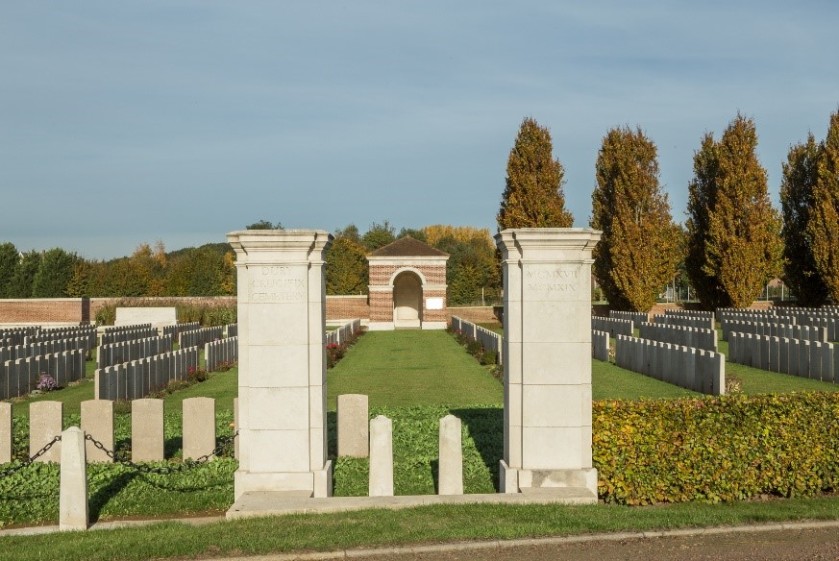 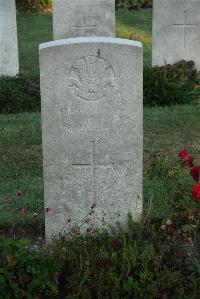 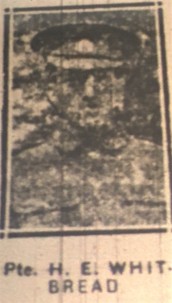 The Concentration of Graves Report , Exhumation and Reburials, shows a different name and service number and date of death. However, having checked the records there is no Whitbread with the Service number 47700 who died on that date, so I think that is just an administration error. 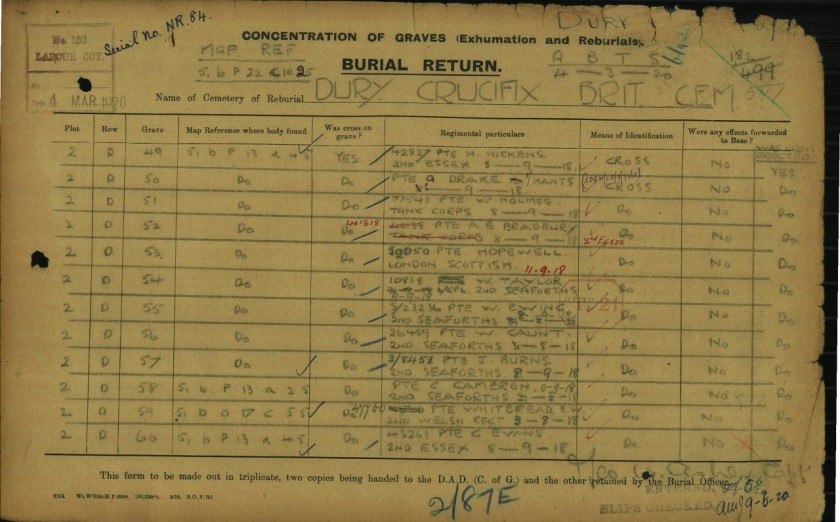 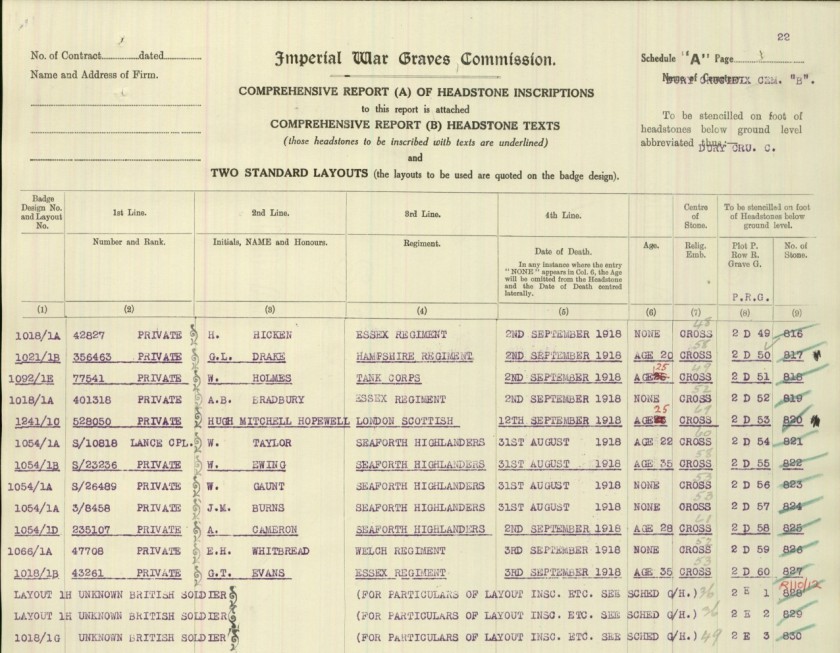 I haven’t found any newspaper reports of his death but his wife put an acknowledgment in the Bedfordshire Times and Independent 20th September 1918.

There is also an entry for Ernest on the Absent Voters List showing that he lived at Argyll Street. It also says that he was in the 4th Welsh.  I think this is a mistake as the Medal Roll for Ernest shows that his army career was spent in the 2nd Battalion.  The Medal Rolls are normally correct. 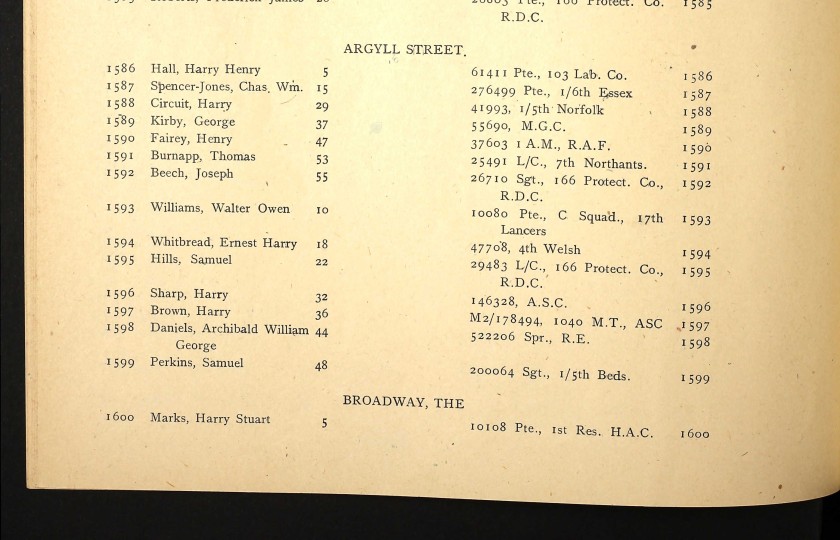 The  Absent voters list can be useful in confirming where someone lived , there was a General Election on 14th December 1918, the first one since 1910.  All men over 21, 19 if serving in the armed forces, and women over 30 were eligible to vote.  There were many men serving and some women, so they had to register to vote, either themselves or a family member could register them. Obviously because it was the first election for such a long time everyone wanted to have their say, and many people registered or were registered  on the Absent Voters lists. As with many records, some have been destroyed, and sadly many listed on the Absent Voters did not return. 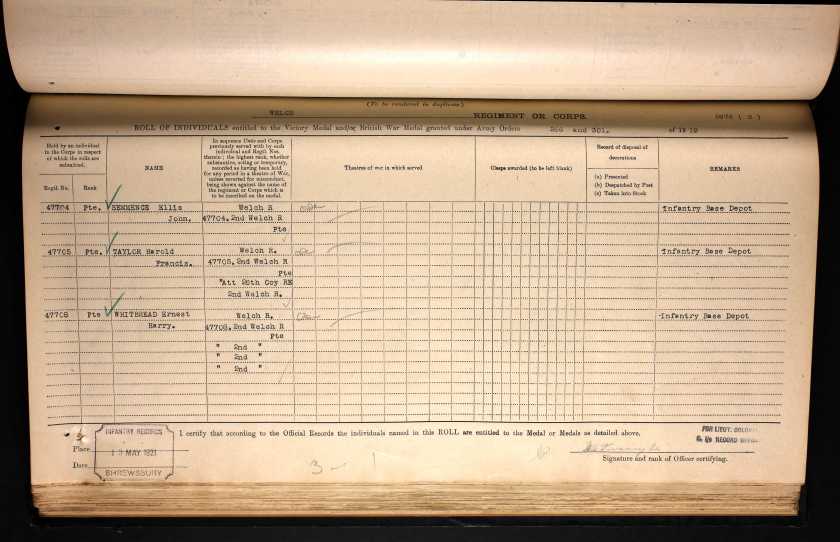 Ernest was awarded the British War and Victory Medals. 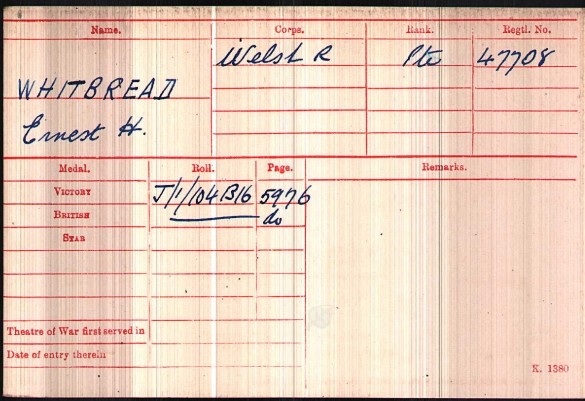 Millicent remarried in 1919 to a Thomas Macrae in Bedford.  On the 1939 register she is still in Bedford and her son Verdun is living with her. Millicent died in 1953.

Ernest is remembered on The Brushes Memorial and Bedford St Peters War memorial. 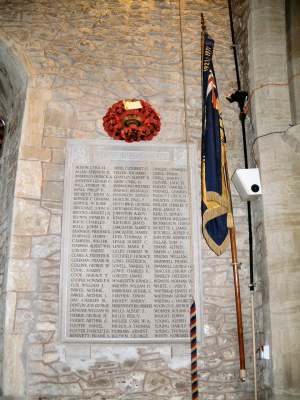 Harry Ernest Whitbread had been a bit tricky to trace.  Before I write anything about the men I like to cross check all the details and that is where my problems began, nothing was appearing to cross reference.  Many thanks to Gloria Evison for the family information and the newspaper report which confirmed for me that  I had found the correct man. 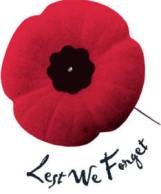 The newspaper report was in the Derbyshire Times 3rd November 1928 and was written on the occasion of  Mr Henry Whitbread’s 80th birthday.

I was recently contacted by Ernest’s Great Granddaughter Melanie, who lives in Australia, she had come across this page and was pleased to read about her Great Grandfather.  She kindly sent me pictures of Ernests medals and ‘Death Penny’ to complete the story of H E Whitbread. 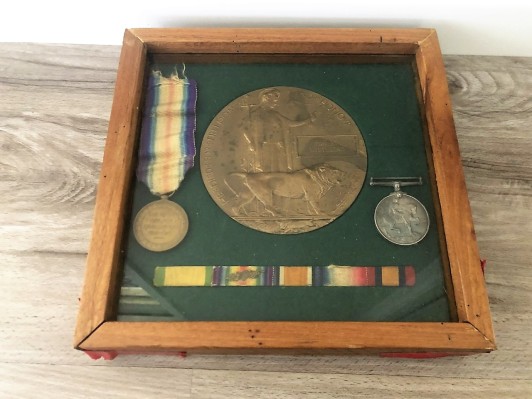 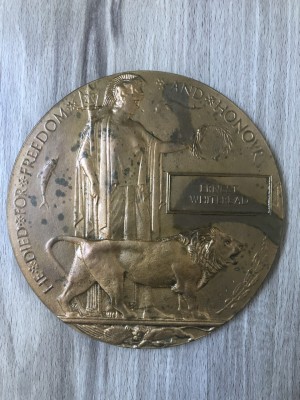 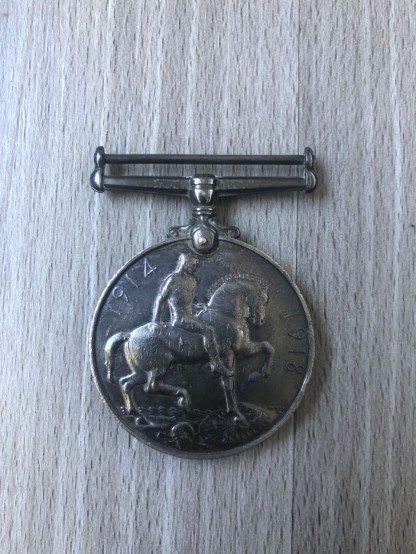 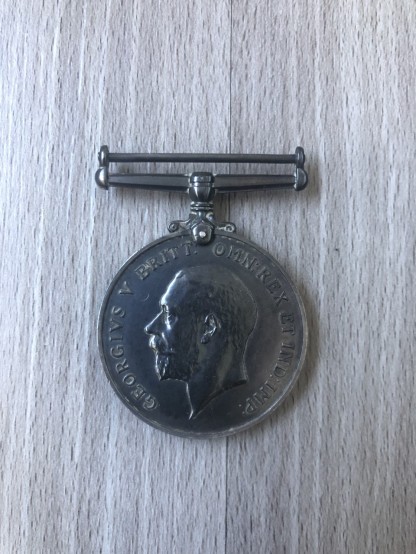 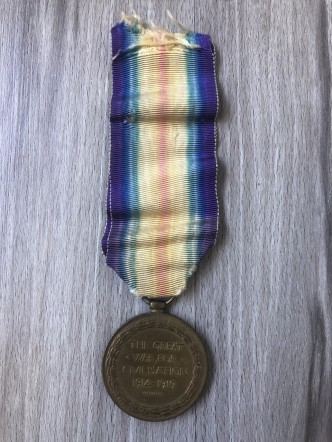 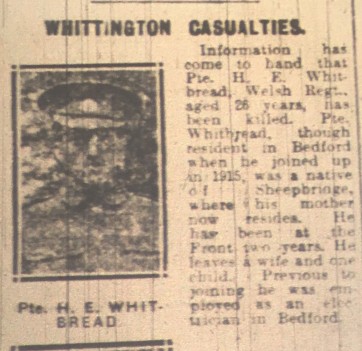