Benjamin Siddall was born at Whittington in 1894.  He was the first son for John Siddall and his wife Eleanor (Mitchell).  Benjamin had three older sisters Sarah, born 1882, Alice, born 1888, Florence, born 1890. (Actually this is not quite true, after checking census and Birth Index the couple had a son named Benjamin who was born in 1880 and died in 1881.  It was not unusual for future children to take the name of the dead child!).

Ben was baptised at Old Whittington church on 8th August 1894, his father’s occupation was given as collier and the address as Mount Pleasant which was a row of houses on Church Street Old Whittington.

The pictures below show Mount Pleasant on Church Street and the date stone shows the date Mount Pleasant was built which I think was 1856 and the name of the builder which was Thomas Lowe. 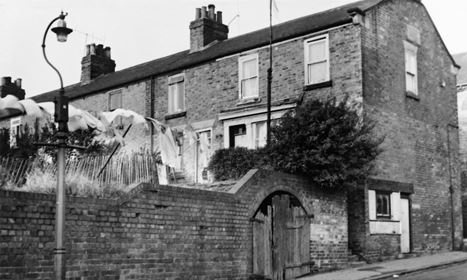 By the time of the 1911 census this only left Ben, his sister Hilda and his parents living at home, the family are still living at Mount Pleasant. Ben was now 17 years old and working as a coal miner and filler.

There is no information online about Ben until 1915, when on 31st May 1915 he enlisted in the 16th Battalion Notts and Derbyshire regiment, Service Number 26780.

The medal card doesn’t indicate which Battalion Ben belonged to but the medal roll does specify 16th Battalion. 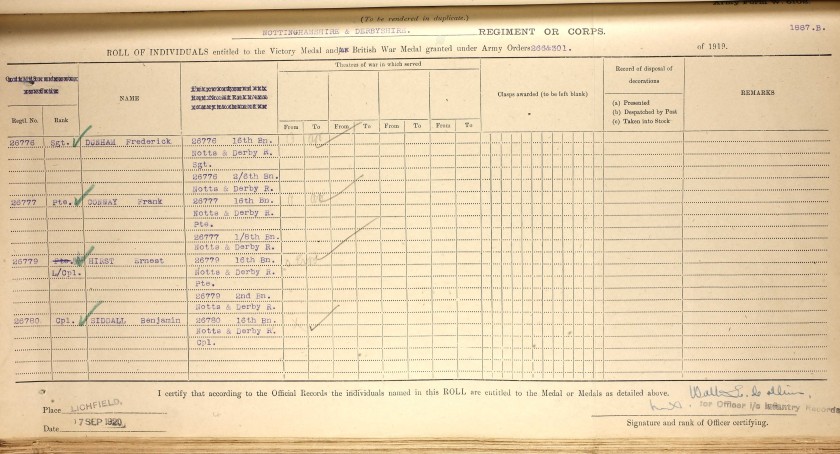 He was  awarded the British War and Victory medals which would suggest he wasn’t sent overseas until after 31st December 1915.  Sadly, not long after Ben enlisted his mother died aged 60 years old.

The 16th Battalion came under orders of 117th Brigade in 39th Division in September 1915. The Battalion arrived in Le Havre on 6th March 1916.  Whether this was when Ben was sent overseas I am unable to confirm.

In October 1917 Ben was definitely in France as part of 39th Division. Late in September the Battalion moved to Wakefield Huts Camp near Locre, which is approx. 8 miles south west of Ypres.

The war diaries show that not all the time was spent in action at the front.  There were inter- company shooting competitions, football tournaments, inspections by Commanding Officers and training.  On 22nd October Ben was back on the front line.  One incident he may have witnessed was reported as follows:

“ 22nd    At 5.0am the Headquarters Dugout was set ablaze by the Medical Corporal pouring paraffin into the saucepan instead of water, whilst preparing hot tea.  In a few seconds the whole place was a sheet of flame and there was only just time to get everyone out. Sgt Cree, the Battalion Signal Sgt, behaved in a most gallant manner- he went back into the dugout and pulled out an unconscious man.  All the material in the dugout was burnt.  A new headquarters had to be established in the vicinity.”

On the 23rd it was reported that they were shelled continuously and an action had to be abandoned due to the thick mud. A few days later what we now know as the Battle of Passchendaele would start.  Ben Siddall was wounded on 23rd October 1917.

He did survive and was discharged from the army on 6th March 1918.  His discharge record shows that he had received a gunshot wound (GSW) and Disorderly Act of the heart (DAH) and that these were attributed to his service. At the time he was a single man and his address was 93 Church Street Old Whittington. 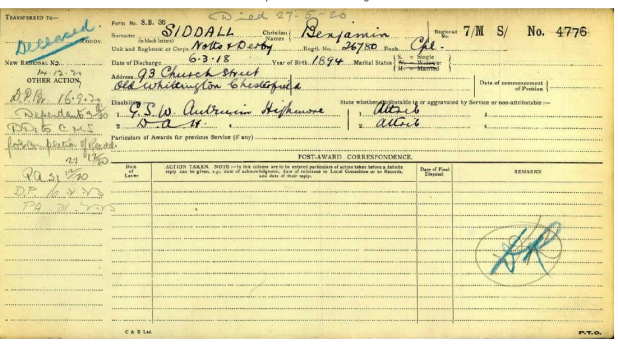 The Whittington Ben returned to would have been much changed and many of his old school friends and colleagues would not have returned home.   There was some  happy news for Ben though when he married Lilian Martin at Old Whittington church on 16th November 1918.

His occupation is now listed as a sawyer, he did not return to his pre-war occupation of miner. He may have worked at the woodyard at the bottom of Whittington Hill.

In 1919 the couple had a son, John.  Sadly Ben did not live long enough to see his son grow up.  On 27th May 1920 Ben died, without a copy of the death certificate I can only assume this was due to his war wounds, but quite rightly his name was carved on the war memorials of Old Whittington and the Brushes along with the rest of the brave men of Whittington.

Information and picture from Wikipedia.org

Bens older sister Hilda married John Thomas Smith in 1923  and according to the marriage register entry, Bens widow Lilian was one of the witnesses to their marriage.