Arthur is listed as Archie on the war memorial and it has taken me some time to confirm  I had the correct person.  After checking the Commonwealth War Graves Commission site and other sources I have been unable to find an Archie Newell and feel confident that Arthur is indeed Archie, and that possibly Archie was just a family name.

Arthur Newell was born in West Bromwich towards the end of 1894, (according to the Free Birth, Marriage and Death Index) his parents were George and (Maud) Elizabeth Humphrey. Arthur had one older sister, Clara and two older brothers George and Albert. Sadly, Arthur wouldn’t have known his mother very well as she died in 1896. Arthur’s father, George, remarried in 1899 to Caroline Loach and by 1901 the family had left West Bromwich and were living in Horbury in Yorkshire.

Horbury is situated close to Wakefield and was once home to engineering works and wagon repairs. George Newell worked as a Puddler at the Iron Works and presumably moved his family up to Yorkshire for work.

More information on Horbury at https://www.horburyvillage.com

The age of Arthur doesn’t quite fit as he should be showing as 6 years old. Arthur now has a younger sister, Edith.

There is no further information on-line for Arthur until the 1911 census, when the family were back living in West Bromwich at 59 Ryders Green Road. Arthur now has four other siblings and what’s interesting to note is that Florrie, who was born in 1908, was born in Alfreton. It looked like the family moved around quite a lot during the first few years of the new century. 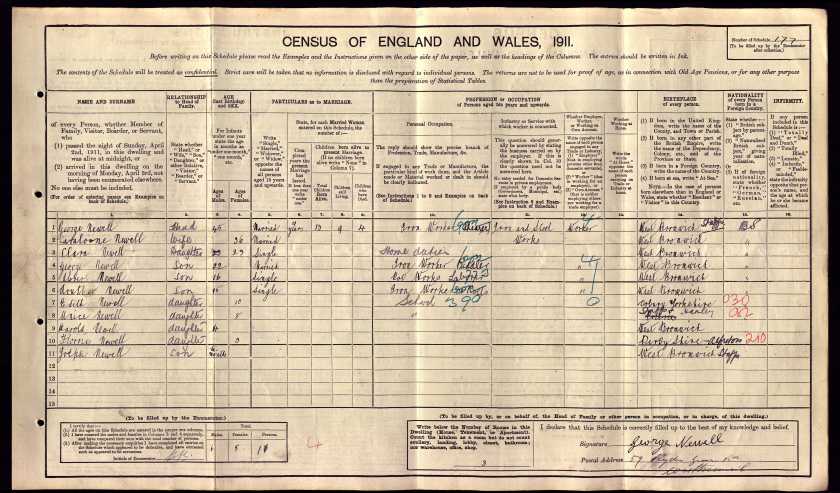 At some point the family moved to Whittington in Chesterfield. There is an unusual twist however, there is a 1911 census entry showing an Albert and Arthur Newell (born in West Bromwich) lodging with William Macefield and his family at 30 Carlisle Street Sheepbridge. Both Albert and Arthur are working as Jar Carriers at the Pottery! I think it would be a big co-incidence if this wasn’t the same people but I have no explanation as to why they are on two censuses. Perhaps the family moved to Chesterfield at around the same time as the census was taken in the April.

Arthur joined up in Chesterfield on September 2nd 1914 he gives his age as 19 years and 326 days. He was of slight build at 5ft 31/4ins with a pale complexion, blue eyes and light brown hair. Luckily some of Arthur’s Service record still exists and the Army Identification form can be seen below. 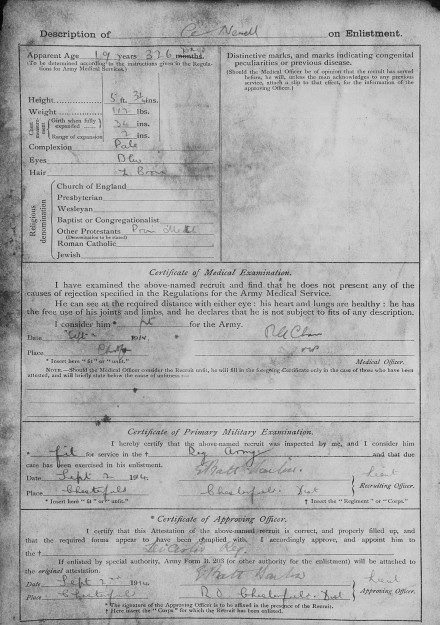 He joined the 9th (service) Battalion Leicestershire Regiment and his service number was 14103.

Badge of the Royal Leicesters (https://en.wikipedia.org)

Arthurs Military History sheet  shows that he was based in England until 28th July 1915 and he arrived in France on 29th July 1915. He was wounded in November 1915 but returned to the front to carry on fighting.

The Military History sheet also lists next of kin, the fathers name is entered as Arthur. I think this must just be an administrative oversight, Arthurs fathers name was George. 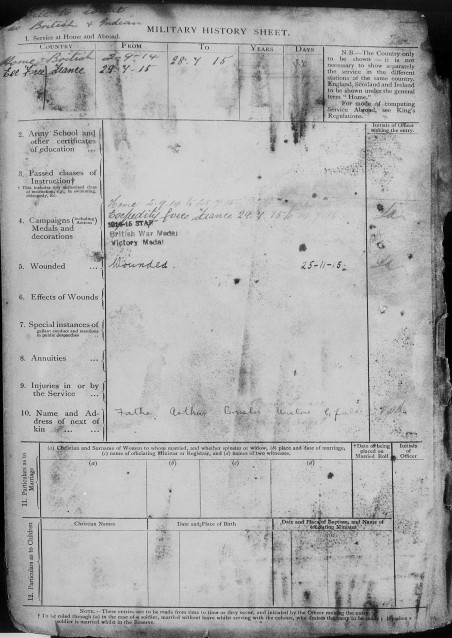 Originally, Arthur joined up on a Short Service Attestation of three years, little did any of the men know that the war would last for over four years!

The 9th Battalion Leicesters were attached to 110th Brigade in 37th Division, as were the 6th and 8th Battalions. The 110th brigade transferred to 21st Division on 7th July 1916 just in time for the Battle of the Somme.

Map of the Somme Battlefield (http://www.ww1battlefields.co.uk/somme/)

The war diaries for 9th Battalion record how Arthurs final days would have been spent:

The 7th July they were off again marching from 9am until 5.15pm! They were rested on the 8th and 9th and on the 10th they were moved again by rail and road to  Meaulte, where they bivouacked until 9pm.  They  moved on again to Fricourt where they took over Quadrangle Trench at 11.30pm.

The following day Arthur would have been under constant shelling and the Battalion reportedly suffered heavy casualties.

12-13th July the Battalion was stood down and Arthur would have had some respite from front line fighting.

On the 13th 600 men with 12 Officers were employed in moving ammunition and grenades to Mametz Wood and the Brigade received orders that they were to attack Bazentin-Le-Petit Wood.

Under fairly heavy shelling on the 14th at 12.15am the Battalion moved off to the south edge of Mametz Wood.

Arthur was presumed dead on 14th July 1916 and like many of his fellow soldiers his body was never recovered. He was 21 years old. He is remembered on the Thiepval memorial to the Missing. Information on Thiepval can be found on the Commonwealth War Graves Commission site, https://www.cwgc.org Arthurs father had to complete a form stating all relationships to Arthur.

This form confirms all the family relationships and that his mother had died. It also clarifies where everyone was living in Old Whittington in May 1919. The form had to be witnessed and on this occasion it was the local rector George Ford who did the honours. 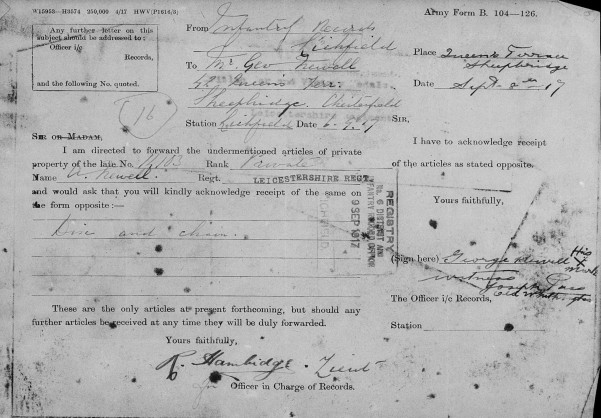 Arthur was awarded the British War and Victory medals along with the 14/15 Star. 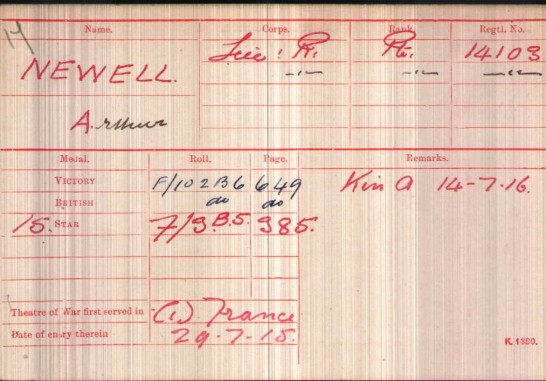 He is remembered on Old Whittington and the Brushes War Memorials as Archie Newell.