George Isaac Fearn was born on 21st October 1890, he is recorded as being born at Matlock, his mother was Mary Ann Fearn, who had been born at Tansley.  George was the first child for Mary.

The family moved to Shaw Street sometime around 1899, as George is recorded as starting school at Whittington Moor Endowed School (later renamed Peter Websters and Whittington Moor Council School) on 23rd October 1899, his previous school had been Stanedge Board School. George is the last entry on the page and he is listed as George Isaiah  not Isaac. 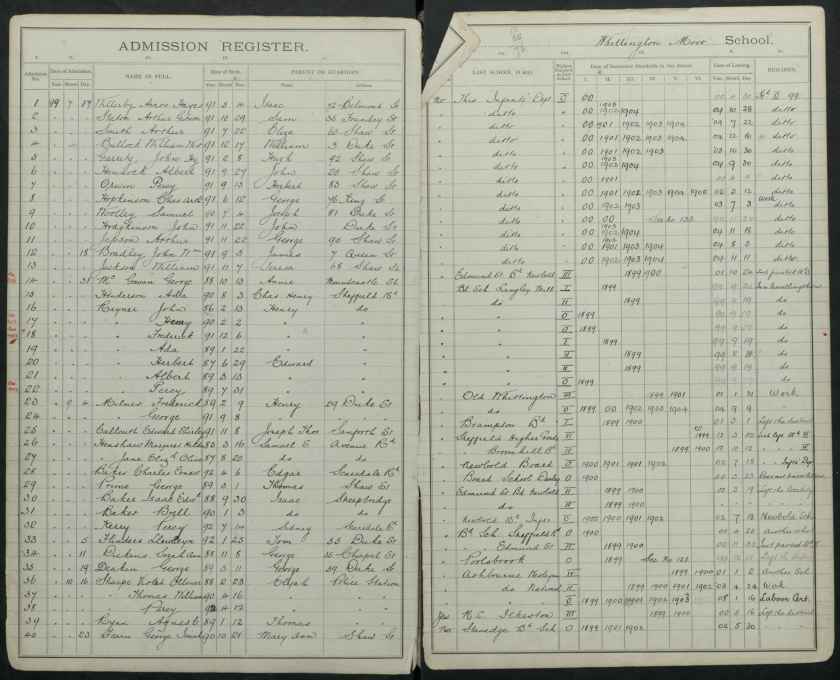 By the time of the 1901 census George’s mother was a widow and working as a  housekeeper, still living at Shaw Street, the census shows that George had now been joined by younger brother Abraham and sister Elizabeth.

The next information for George is the 1911 census, by which time he is 20 years old and working at the pottery as a kiln filler. There were several potteries in the Whittington Moor, Newbold Moor and Whittington areas, Pearson Pottery was probably the closest to where George lived and quite possibly where he worked. 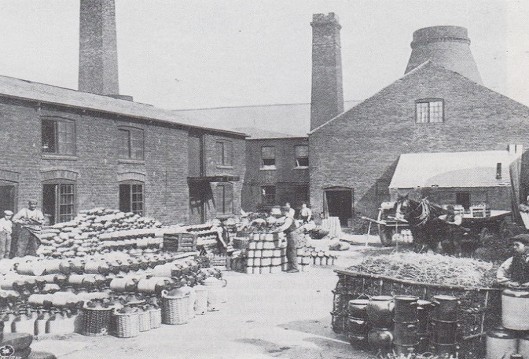 Picture courtesy of achesterfieldblogger.co.uk  where more information can be found on Pearsons Pottery.

Sometime before George joined up he changed employers and was working for the Sheepbridge Company, where he was regarded as a ‘steady and reliable’man.  The family also moved at some point after 1911 to Newbridge Street at Whittington. 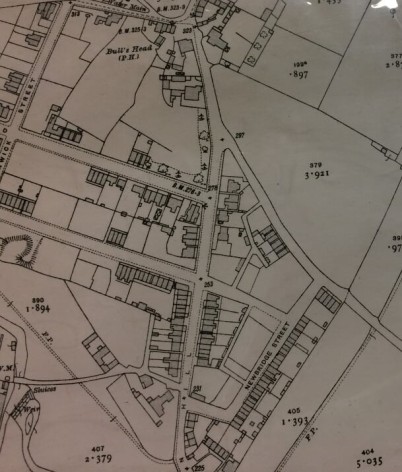 George enlisted in the Sherwood Foresters in February  1915, he joined the Notts and Derbyshire Regiment and his Service Number was 22886.As George’s Service record is not available then I cannot confirm which regiment he joined however, he was later to change his regiment and joined the newly formed Machine Gun Corps, his service number changed to 8845.

The Machine Gun Corps were formed in October 1915 in response to the need for more effective use of machine guns on the Western Front, their depot and training centre was at Belton Park in Grantham. The Corps were disbanded in 1922, but by that time had earned a reputation for heroism as a front line fighting force. 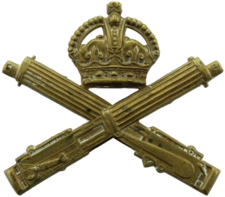 George would have been entitled to wear the cap badge of the MGC.

Because of the nature of their weaponry, troops from the MGC often fought well beyond the front line this  earned the MGC  a high casualty rate and the nickname… ‘The Suicide Club’. 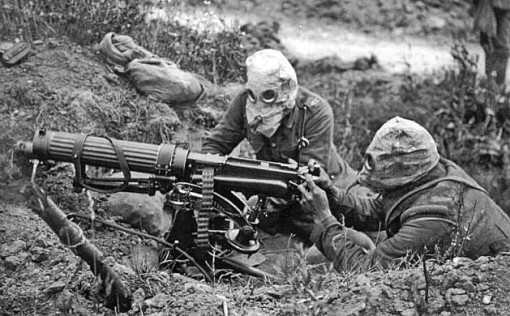 British Vickers machine gun crew wearing PH-type anti-gas helmets. Near Ovillers during the Battle of the Somme, July 1916. The gunner is wearing a padded waistcoat, enabling him to carry the machine gun barrel. IWM photograph Q3995 from http://www.longlongtrail.co.uk

George was wounded on 31st July 1916 and was taken to a Field Ambulance Station, where he died from his wounds, he was 25 years old.  It is reported in the Derbyshire Times 26th August 1916 that he died from severe wounds and gas. George is buried in Albert Communal Cemetery Extension.

Several of the  Field Ambulance stations used Albert Cemetery extension for burials. More information can be found at https://www.cwgc.org 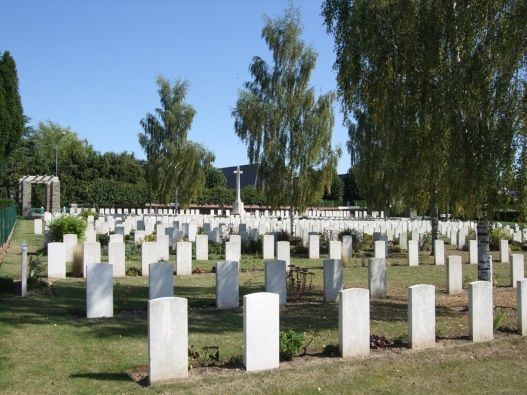 According to the grave details for George his mother was living at 52 Newbridge Street Old Whittington, it must have been a terrible time for her, as George’s younger brother Abraham had died a few months earlier!

The grave report for George states that he belonged to 97th Company MGC, however they did not go overseas until  March 1917.

The original grave report has a J T Fearn with service number 8845 who died on 31st July belonging to 110th Company MGC.  There appears to have been some confusion somewhere but I think it is more likely that George belonged to the 110th Company  which did go overseas in March 1916 and in July 1916 was part of 21st Division, and the 21st did see action in the Somme Battles. Sadly, as there is no Service record, I cannot be 100% certain.

The inscription on George’s grave reads:

“Gone but  not forgotten” 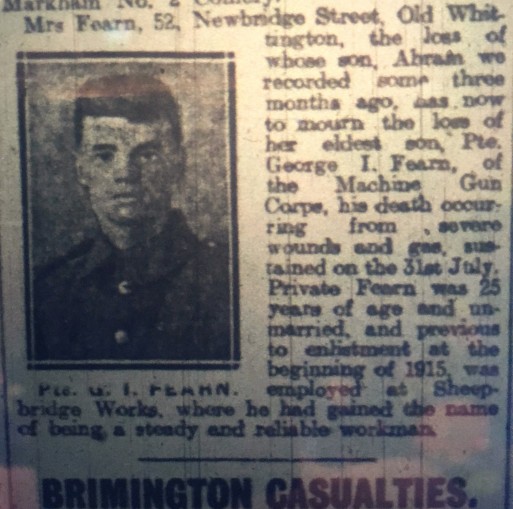 George was awarded the Victory and British War medals. 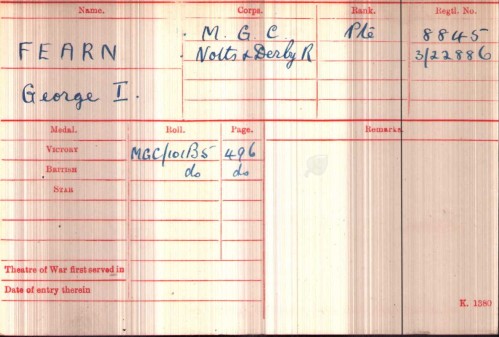 George is remembered on the Old Whittington  and the Brushes war memorials, alongside his brother Abraham.

The Machine Gun Corps have their own memorial in London, known as ‘the boy David’ which has an inscription on the front commemorating ‘the glorious heroes of the machine gun corps who fell in the Great War’. A further inscription on the rear records that the Machine Gun Corps was formed in October 1915 and disbanded in 1922; in that time, some 11,500 officers and 159,000 other ranks served in the Corps, of whom 1,120 officers and 1,671 other ranks were killed, and 2,881 officers and 45,377 other ranks wounded, missing or prisoners-of-war. 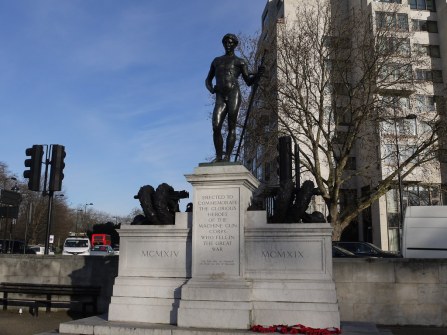 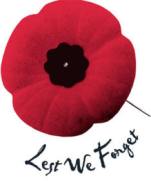